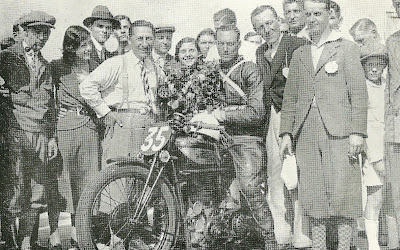 From "Continental Circus and other Races between the Wars" by Ted Mellors, published in 1949. The photo shows Tim Hunt, winner of the "French". Further, French agent Psalty on the left and Joe Craig on the right. The Norton is a CS1. Note that Tim has the twistgrip fitted to the left-hand side of the machine. Further note the typical Norton girder forks (with a damper knob on each side of the lower spindle) fitted to 1931 Works TT machines. (Contributed by Alf). 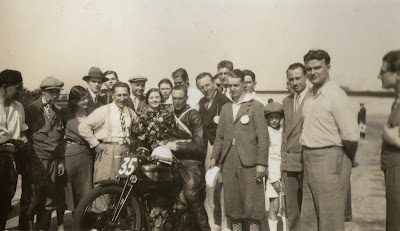 -SG- Arthur Tyler was a works rider for Raleigh and Vincent during the early thirties and this photo comes from his personal album - courtesy of his son Stuart Tyler and Paul Ingham. Note that it's almost the same as the photo above ... Another camera or a second later ?
Newer Post Older Post Home