A discussion spurred by pictures of a Model 18 Ron is selling; it's a 1928 model but clearly has an earlier cylinder head. The fins 'on top' are higher near the exhaust. The fins on later heads are all the same hight. Also check this entry. 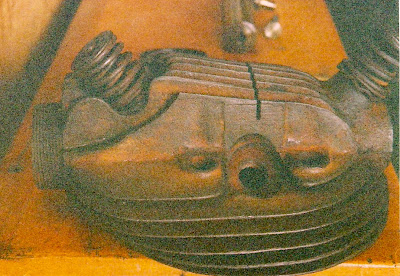 Simon:"The good thing about this particular 1923 head (above; not a very good picture!) is that it still appears to have its original valves and springs - see the drawing (below).  Note that the valve sizes agree with recorded history that the early OHV engines had a larger exhaust than inlet valve.  I guess it's a bit 'anorak' to record this sort of stuff but it's not written down anywhere else as far as I know" 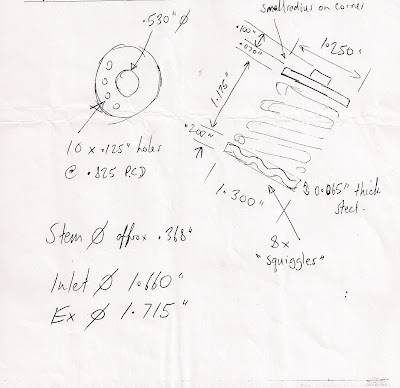 "Regarding valve springs.......I don't propose to go into detail about the various valve spring retainers as there are bound to be chaps who pop up and say theirs are different in some way or another! However it seems to me that MOST of the '26 to '28 OHV engines were fitted with retainers which take the following springs:

Peter Roydhouse made the comment to me a while back that Norton springs were unduly strong and he suggested using springs from post war 350 engines BUT the diameter of these may be too great for use on the open pushrod engines and one would have to change the valve spring retainers. Might be better to get the spring maker to use a slightly lighter gauge wire to reduce poundage although he would need to stick to the internal diameters given."
Newer Post Older Post Home