Sent by Paul in Australia 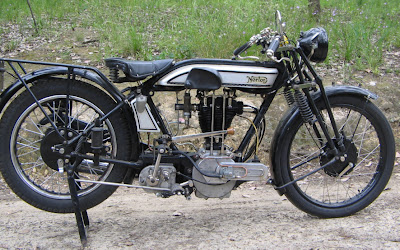 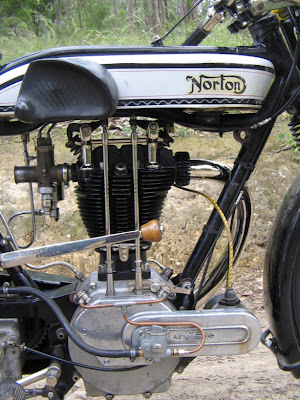 "This Norton left the works on the 3 October 1927. It is a genuine model 19, with the 588 stamped on the frame, but unfortunately it does not have the original engine. The current engine has a later barrel, but it does have the genuine model 19 cylinder head which was recently refurbished. The bike left the works with 26 x 3.25 WO tyres. It currently has a 21" WM1 on the front and 19" WM2 on the rear. The bike left the works with a B and B carb which it doesn't now have, and  B and B twist grip throttle, which it does have. Front forks were DTT27s. Overall I am very pleased with the bike and very lucky.  Previous owners have been meticulous in their restoration and care. I have had all the chrome taken off as I love nickel." 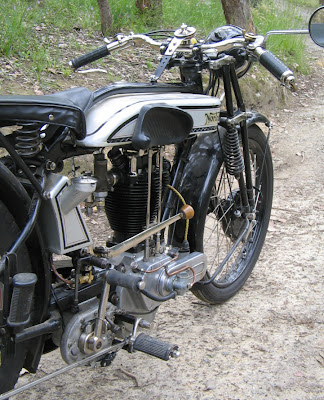 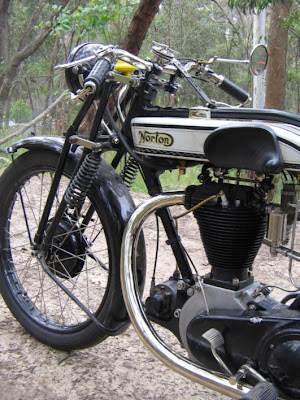 DTT27 are Druid forks but not the ones on it now - which are standard HRT Druids.  DTT27 type was the TT Druid with side bracing struts - very few and far between even then.  The Model 19 as catalogued had standard HRT Druids but many were shipped out with Webbs.

The cylinder barrel may be 1930 but it has the push rod return spring bracket in place which makes it more likely to be a bit earlier.  However plenty of 1930 588 barrels had the push rod return spring boss in place but unmachined to take the bracket. The open valve gear Model 19 cylinder head looks the same as the Model 18 version  - but isn't.  It used deeper recesses for the cylinder head sleeve nuts and longer sleeve nuts.  Valve sizes etc were the same.  No one has yet come up with a reason for this although one suggestion was that, with  the tall barrel and lack of clearance under the top tube, it would aid head removal for the week-end decoke/valve grind with which everyone seemed obsessed pre-war!  This would hold good if the head studs themselves were a little shorter and I have no evidence that they were so remain unconvinced!

While chrome began to be publicised in 1924 it did not become widely used until 1930 and in 1927 Nickel would undoubtedly have been used by Nortons and everyone else for that matter.  Incidentally rocker standards and rockers would not have been plated originally.
Newer Post Older Post Home