Sent by Colin in Australia

-SG-  It it obviously fairly early as it still has a Sturmey Archer gearbox and Best and Lloyd filler caps. Also note the studs on the tank to take George Dance kneegrips and the inverted lever for the valve lifter - all pointers to it being - originally - '32/'33 -ish. It has a Mosely inflatable 'bum-pad' and down draught carb. The forks are strutted and I've never seen strutted Norton (as opposed to Webbs/Druids) forks before but the struts may be bolt on jobs - not easy to see one way or the other... 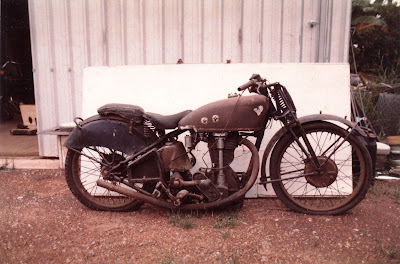 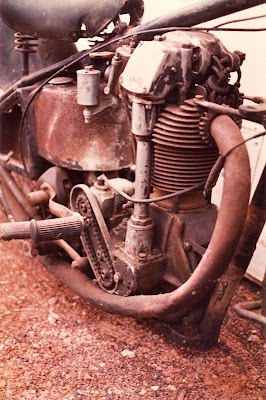 "This outfit was bought by me in about 1964, from one Joe Vial, who ran a wrecker’s yard specialising in early Jaguar cars at Blackburn, Melbourne, Australia. The bike was tucked away in a corner of the yard covered with the bonnet of a Standard ‘Vanguard’ and numerous waterlogged potato bags. It appeared that Joe’s brother had cleared out his garage and the outfit had been dumped in the yard – probably because it was closer than the tip. When found, the Norton was fitted with a narrow 1930’s-period racing sidecar, rather like a ballet shoe in contour. The sidecar is built up on the basic frame of a lightweight Goulding touring ‘chair’. The most notable things about the bike on casual inspection were the crankcase, rather roughly cast in bronze (!), and the faded legend “Norton 596” painted on the sidecar nose. When, on discovering it, I asked Joe about the bike, he described it as an ‘Oily Manx’, essentially a prototype, that later evolved into the single OHC ‘International’ sports machine and the twin-cam ‘Manx’ of racing fame through the 1950’s, 60’s etc. The crankcase has no identification and there is no frame number either! 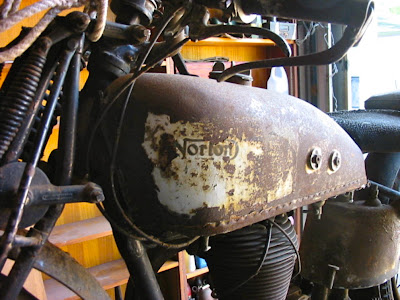 Joe and his brother had raced it in Victoria, mainly fitted with the side-car, prior to World War Two. It had ‘blown up’ in 1939, and had been re-built. It was being run-in when war broke out and was not used again. It's claim to fame, according to Joe, was that it held the record for the long defunct Whittlesea hill climb.


I coveted the machine from the outset, but being in the ‘impoverished student’ category, couldn’t afford the £50 Joe demanded for it. I went around to the yard from time to time for car parts and checked up on it whenever I was there. The price went down to £45 after a time, but that didn’t really help me much. Finally, during one visit Joe told me, with a sort of morose satisfaction, that one night, a week or so before, someone had tried to steal the bike. They had dragged it to the corrugated iron fence of the yard, but apparently found it too heavy to lift over. The evil-doers (or at least evil-attempters) then tried to take off the carburettor and magneto. Fortunately, as both are rare period racing items (a BTH magneto and an Amac twin float chamber carburettor), they could not get them off with the pair of pliers and screwdriver which seemed to be their only tools. All that was actually stolen was the fuel lines and magneto chain cover (bastards!).


Now this episode thoroughly scared me, and I immediately came to the conclusion that the motorcycle was actually more desirable than three meals a day, so I bought it for £45. It came with a box containing a set of engine shaft sprockets and a selection of alcohol jets for the carburettor, together with a spare high compression piston and a few other odds and ends. In order to get it from the wreckers yard to where I lived four or five miles across town, I enlisted the help of a student friend with a car to tow me on the equipage. Being towed through Melbourne suburban Saturday afternoon traffic on a sidecar outfit with only one grabbing brake and the chair hovering in mid-air on its dirt-track camber was something of a defining experience in my life – it brought home a profound conviction of my own mortality.


According to Joe a rough factory manual with tuning and gear ratio recommendations was around somewhere; he thought his brother still had it. At that stage I was leaving Melbourne for a couple of months, so I arranged to pick up the manual from Joe on my return. When I went around to the yard next, not only was the manual not there, but the whole yard had disappeared and a housing estate was going up. Despite extensive detective work I never located Joe or his brother.


Various explanations have been offered for the bronze/brass crankcase, but no definite explanation has emerged – It may have been part of the 1939 rebuild, but looked far more weathered than short running-in sessions would explain.  Presumably the extra strength of bronze over aluminium justified the awe-inspiring weight of the unit. Alan Bruce and some of the old-time riders in Europe became very excited when they heard of it, saying that Norton had built a couple of bronze-crankcase 596’s in the 1930’s for an attack on records on Brooklands and this could well be one of them. So far we have not been able to confirm this. The frame seems to be heavier gauge than a standard Norton 500 and has exceptionally low ground clearance, as if it were designed specifically for side-car racing.


It has been very difficult to get much information about this machine. Roy Bacon, in his book “Norton Singles” makes a short mention on page 47 of a Norton 596cc OHC “Big Banger”, observing that:  ‘few were built, all intended for sidecar use’. A handful of iron head, single-cam versions were built, said to be intended for a British ISDT team. This example has an iron cylinder head. Apparently a few did escape from their British captivity; early photographs of Victorian and South Australian competition indicate that probably two made it to Australia. Judging from some early photographs, this may be the ‘596’ raced by Laurie Wren of Adelaide earlier in its life."


Addendum, April 2012
In Dec 2010 exhortations from the UK prompted me to look for a number on the spare cylinder barrel that came with the Norton. A number 56859 was discovered on the base flange. Also a serious cleaning exercise on the frame - somewhat akin to archaeology - brought the number - 30-596 / 51506 -to light beneath several strata of paint and Castrol R on the engine mounting lug on the frame down-tube.


Once this frame number was available the following information could be gleaned from the Norton Owners Club in Britain:

The machine was despatched from the Norton factory on 15/10/1933, making it (due to Norton’s odd dating system) a 1934 model. The original engine number corresponds to the number on the ‘spare’ cylinder barrel and the numbers on the forks and the magneto correspond to my machine. Intriguingly, the gearbox number is recorded as 9892, while the number on the existing gearbox is 7892. The extensive welding stripes on this gearbox case may explain the fate of the original box.

Extras were listed as “To racing specification. Twin float carb. Special tune.”
The Agent/Dealer note was: “Tozer KM (ETF Adel) Aus S/Car TT”
The name ‘Tozer’ leads one to speculate that Harold Tozer, the UK sidecar rider of the period, may have had some involvement, but so far nothing to support this has come to light.

‘Adel’ seems likely to mean Adelaide and the Adelaide Advertiser of 8 March 1934 records Bruce Rehn setting over thirty Australian and South Australian speed records at Sellick’s Beach on a “598 Norton”. Moreover, the Melbourne Argus, of Tuesday 29 January 1935 lists Rehn as winning the Australian Sidecar TT at Phillip Island - by two miles out of fifty- on a “590 Norton” outfit.

So there are still gaps to be filled in and further research is in order; but allowing that motor sport journalists were unlikely to be more precise then in recording technical details than they are now, I am cherishing the hope that my ‘Big Banger’ is in fact the rather heroic Rehn machine referred to.

It would appear that the 596 must have had positively orgasmic power to tear up one crankcase and two gearboxes during its racing career, so it will be most interesting to have it running again, even using it with the respect due to its great age and many infirmities - qualities it shares with its owner.

If anyone can provide me with any information to help my research, or parts to help my re-build, please drop me an email on colin@delarue.net
Newer Post Older Post Home