One of the main disadvantages of bound copies of "The Motor Cycle" that are in the Brooklands Museum library is that the advertisements have been removed. A small number of complete copies of the magazine have recently been added to the collection and some of the "small ads" have revealed some interesting machines. The one below from Kings offers a Norton International to racing specification with totally enclosed rockers and valve springs (!) and this made me have another look at an earlier blog. 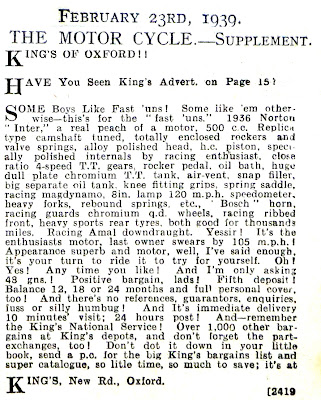 The "mystery" of the single versus double overhead valve Nortons in the 1937 TT has already been resolved by Mick Woollett but this is an opportunity to add some more to the background. The Norton and Velocette directors were on very good terms and often lunched together. In 1935 the introduction by Velocette of enclosed rockers using the "dog kennel" cambox was so well publicised that when Norton used its enclosed box for the TT there were rumours that it had been made by Velocette. The rumour gained enough credibility that Norton were forced to advertise the fact that it was their own design and manufacture. 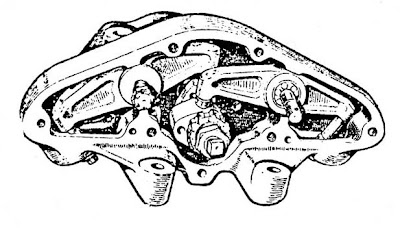 This cambox (above) is the type that appears in the 1983 article where the springs are exposed and the valves operated by short tappets that protrude from the bottom of the box. For 1936 Joe Craig was keen for the Nortons to use a double overhead camshaft arrangement and engines were taken to the Isle of Man. Lack of time for development meant that the small diameter solid tappets were retained and in an article in 1943, entitled "Development and the Time Factor", Joe Craig said that this lack of time caused Guthrie and Frith to revert to the 1935 type of valve gear. This is the likely explanation for the confusion over which type was used the subsequent year. 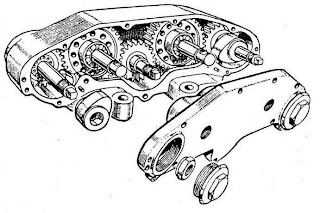 For 1937 the double cam arrangement (above) had been developed using larger diameter hollow tappets and this was used in the race as it had proved to be reliable in testing. The main advantage was that they proved to be considerably faster as even the 500cc could be revved to 6,500 rpm. 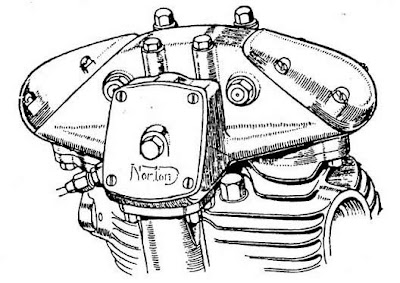 So what was the machine that was advertised in February 1939 as neither of these boxes had enclosed springs? There was a third layout attributed to Edgar Franks which is reported to have been tried by the factory which used coil springs which together with the rockers were enclosed (above) so the King’s advertisement is likely to have been for this experimental machine which with a top speed of 105mph as a fully road equipped machine would have been quite impressive!
Newer Post Older Post Home