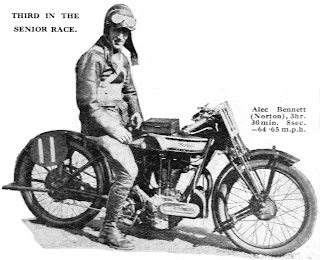 I have found a picture (above) of Bennett and his Norton at the end of the 1925 TT which shows the braced Webbs that he used in the race. I wanted to confirm that he did use the braced ones as I had read elsewhere that they were so still that they caused frame breakages on the sidecar outfits. I am most interested in the design as the brace appears to be in line with the fork's front tube rather than midway between as on the Druids. I think that the 1925 TT was the first time that braced Webbs were used and this may also be true for the Druids because of comments in The Motor Cycle; developments tended to be "shared".
Newer Post Older Post Home