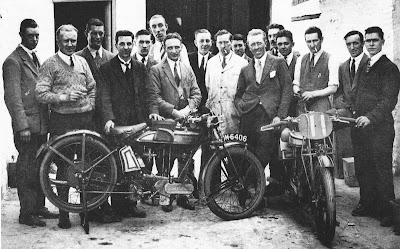 The attached pictures are of interest in the discussion about the 1925 Bennett TT Norton as the main picture shows it (above, on the right, number 11) as part of a group photograph. The registration number can be seen as can the braced Webb forks. Interestingly all of the sidecar outfits were equipped with braced forks but these were all side sprung Druids (see second illustration below). Both Bennett and Woods won TT races on Nortons which had been supplied by the works but I believe that their status was different to the exclusive team contracts that we know today. Bennett had won the previous year so was likely to have been given the machine which is why he registered it through his dealership. He is likely to have received a retainer for the ride together with a bonus for finishing. Certainly a couple of years later he offered to ride a Velocette in the Junior on the basis of a handsome bonus if he won which he did easily. The reason for this approach was that, like the other riders, he was contracted to suppliers (tyres, chains, oil, fuel, magnetos, plugs and so on) which might conflict with the standard Norton supplier. In this way he would benefit from both the Norton and all of the other bonuses.

The team picture is interesting as Mick Woollett in his book disparagingly describes it as the Norton camp and hangers-on as he only identified Walter Moore, Joe Craig, George Tucker and Alec Bennett. I believe it is a picture of the whole Norton team in both the Senior and Sidecar races. The ones I can identify are from the left: Pat Driscoll, Tommy Simister, Bert Taylor (second in Sidecar race), ???, George Grinton (third in Sidecar race), Joe Craig, Walter Moore (Team Manager), Ralph Crauford, ???, Joaquim Vidal, George Tucker, ???, Cliff Juggins (Pat's "hanger-on"), ???, Alec Bennett, ???. 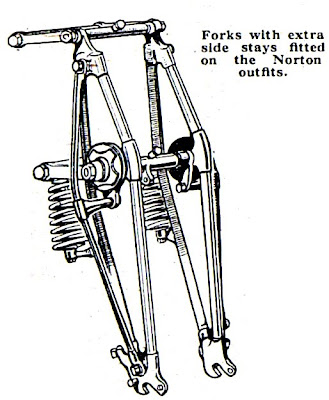