From the September 2010 issue of the Dutch VMC magazine 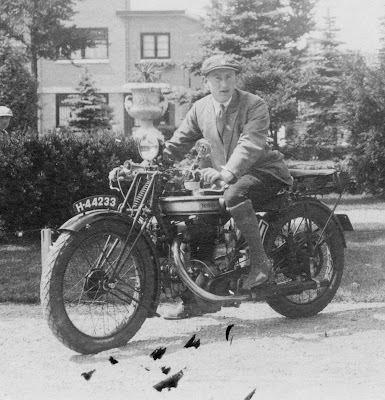 This photo most probably shows mr A. Veelenturf from Bodengraven in the Netherlands on his 1925 Model 18 (the registration H-44233 was issued in May 1925). The machine is fitted with electric lights and the headlamp may be Bosch. The carburettor is rather special for a road going machine as it is a Binks Mousetrap.

Roger: "The carburettor looks identical to the Binks three jet Mousetrap on a Zenith at Brooklands. The front part looks like the conventional two jet Binks with with addition of the variable venturi flap at the rear controlled by the second cable (both cables can be seen in the picture). The two jet version is indistinguishable from the three jet one as the other components are the same but the internal jet block has an extra hole for the third jet. The two/three jet Mousetrap was a vast improvement over the single jet version which supplied a rich mixture at anything less than full throttle - acceptable for dope but much less so for petrol. I suspect that best results would be obtained from the three jet version by leaving the venturi flap wide open. In this way it would function as a normal three jet carb and the flat could be closed for enrichment for hills."

Simon: "Several OHV Nortons are shown in the despatch books as being fitted with the Mousetrap during the mid twenties and although the specific version is not mentioned it is reasonable to assume the current type at the time would have been fitted.  'Several' is perhaps an overstatement - only four are shown up to Autumn 1924. The three jet version of the Mousetrap came in in 1926 so the one fitted to this 1925 Model 18 may have been the earlier type or, if fitted after delivery, one of the later type. Below is an extract from the 1925 Lucas instructions and the one on the bike looks similar althought the advance and retard is on the back rather than the front (ie tight wire advance - the usual Lucas arrangement at the time) and the arm holding on the contact breaker cover is above rather than below." 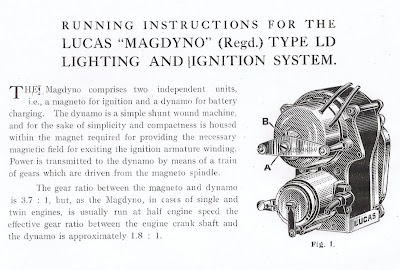 Roger: "The picture I have of a 1925 Lucas magdyno (below) looks rather different. The Maglita is much squarer and I also have found a picture of the CAV and none of them look like the one on the machine. So perhaps it is a Bosch system." 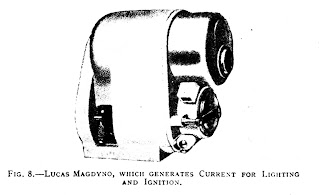