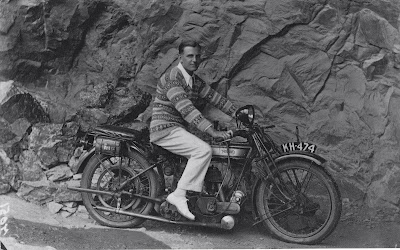 An email from Bruce in the US:

"I have attached a photo of my grandfather, Malcolm Freeborough, on his Norton. The back of the picture is inscribed with his name and the comment "mid 1920's". I believe Malcolm was born, and lived in Kingston-upon-Hull at the time the photo was taken, perhaps by his future wife (they were married in 1929). By early 1930s Malcolm was living in Belgium as a Works Manager for his firm. I am hoping that by identifying the bike and the license plate number I can date the picture a little more accurately. The bike probably ended up in Belgium. Malcolm stopped riding after waking up on the side of the road one evening on his way home from work. He commented to me that with a wife and child, he felt he ought to consider less risky transportation. Kind regards, Bruce Glanville."


The registration plate would have been issued by the Kingston-upon-Hull County Borough Council somewhere between January 1925 and January 1930. The Norton is a 1925 Model 16H with a full set of electric lights; note the switch below the saddle. There is a Cowey horn mounted on the top frame rails. Refer to this blog entry for the oilpump type.
Newer Post Older Post Home