Elsie and Mairi go to War 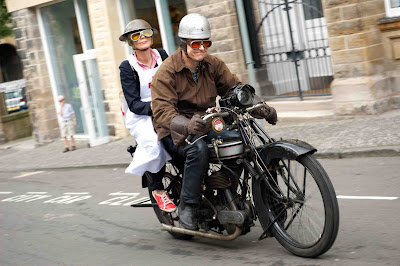 I thought you might be interested to hear about a show in the Edinburgh Festival I have been involved with using the faithful 1920 16H Norton. Before the show opened, I took the author round Edinburgh to do some promotion of the show, (photo above, spoiled only by Di Atkinson's bright red sneakers, which should have been photoshopped to a dark brown to disguise them!!) and she then asked if she could use it in the actual show as a prop. This involved emptying the tank and giving the bike a thorough clean, which was actually quite a chore but has been beneficial otherwise as the bike hasn't had a 'proper' clean for a long time!

The show was called 'Elsie and Mairi go to War', a stirring true tale about two WW1 motorcyclists who had an amazing time nursing right on the western front near Ypres and who survived to tell the tale unlike many who perished... Take a look by following this link. Although the girls didn't actually ride Nortons, they were delighted to have the bike for the show, and it performed admirably as a static exhibit onstage, occasionally with one or other or both of them acting out a story in animated fashion. I had strapped the rear stand down so the bike couldn't roll off with disasterous consequences. After the last show, I refilled the tank and she started first kick and I rode her home!! What a performance!!