Annoyingly, the Model 30 cylinder-head bought cheaply on Ebay did not fit Rob's CS1; the holes seemed to be in the wrong position. Simon explains: 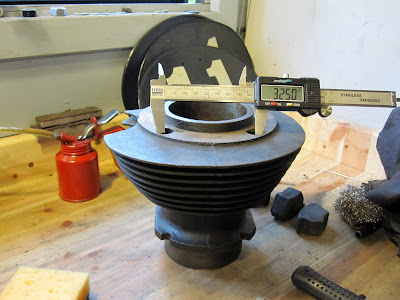 "On the Moore CS1 the centers of the cylinder studs were 3 1/8 inches. This dimension was retained for the early Carroll engines but not for long (date unspecified). It then changed to 3 1/4 inches centres and the reason for the change was so that the much wider spigot on top of the barrel, which provides a vastly improved seal where head meets barrel, could be employed. The spigot on all of the vintage engines and the Moore CS1s is a very small and shallow and it acts only as a locator for the head. It seems as if the standard OHV and SV ones were retained at 3 1/8 inches for many years after and the OHC ones differed"
The photo shows a barrel fitted to a 1932 CS1 engine with the 'big spigot' and 3 1/4 inch cylinder stud centers.
Newer Post Older Post Home