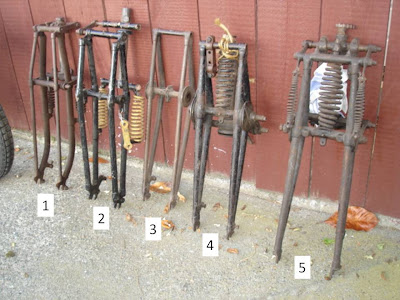 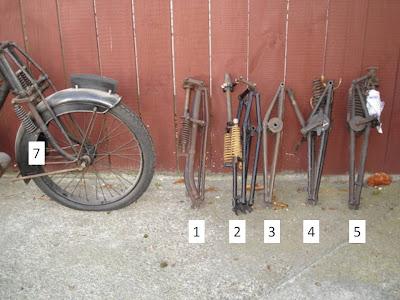 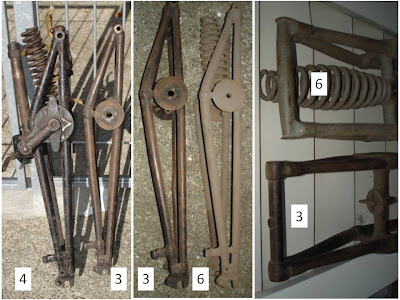 Finding out what type of front forks should grace your vintage Norton is not easy. Numerous designs have been used and some look quite similar while there may be many differences in the details. Reece sent me a few pics of his collection of vintage front forks and a description. Reece:"...and I don't want to put too many years and models on these as I guess any bike could be ordered with anything and will open a can of worms!"
No 1. Druids. c1923-1925. Has a front brake anchor point.
No 2. Druid. Late 1920s. Round tube, no tapering.
No 3. Webb. Standard weight, tapered tubes.
No 4. Webb. Heavy weight. Heavy weight forks have larger tapered tube, 4" damper discs instead of 3", larger diameter spindles etc.Note the 'modern' mudguard bracket
No 5. Norton. 1934 on. (note check springs, splayed legs, two grease nipples top-front spindle, left side brake anchor)
No 6. Webb. Standard weight. Early 1930s. Similar to number 3 but with small differences.
No 7. Druid. Early 1920s. Mk II, mainly fitted to Big Four and 17C models.


"Just a few random thoughts re forks. I concur with your remark about the wide variety of forks fitted to vintage Nortons over the years. It is fair to say that hardly two are the same. However, up to 1924, most Nortons were fitted with standard sidespring Druids of middleweight or heavyweight pattern (fork No 1). The belt drive bikes seem to have lighter weight forks, but probably still called middleweight by Druid. Main difference between the two is the width of the blades and the diameter of the pivot spindles.


In the early 20s a new design was introduced by Druid called the 'Mk II' in which the lower links pass through a secondary linkage which carries two tension springs up the centre which allow the forks to wobble horizontally as well as vertically. Sounds like a plate of jelly and handles like one too! These were mainly fitted to the bigger sidevalve bikes like the Big Four as they suited sidecar and other heavy use. (fork No 7).

The Webb single spring design (fork No 3) came in around late 1924 for the OHV bikes and was a huge improvement for those that tried them but not everyone was convinced, like Graham Walker who insisted on keeping on with the sidespring design. The early ones (1924 and 1925) had flat fork damper plates without turned over edges and then in 1926 they introduced the familiar spinners to apply the damper spring pressure and added the turned over edges so the friction discs are hidden from view and road dirt. These are easily recognised as the blades have straight (ie not tapered) tubes and are also parallel sided not splayed out. They look quite light and they are, and were superseded by heavier forks with tapered tubes. There is a man in New Zealand who makes both types of damper plate in case someone needs such things...


In about 1926, the sidespring Druids with round front tube and oval rear tube were replaced by the 'RT' (round tube) design (fork No 2) using heavyweight round tubes front and rear and in a diamond shape not the familiet triangle. These were fitted to all the sidevalve models until the early 30s as far as I know, and are sound forks if a little short action as the spings are far stiffer than the long single central spring of the Webbs, and they have little or no dampers fitted.

The parallel blade Webb design (fork No 4) came in for the first of the cammies, the CS1, and was then adopted on the late 20s OHV bikes. It is a lot heavier than for No 3. Fork No 5 is the post 1933 check spring design which carried on right till the end of girders in 1946 with one or two small variations and weight differences...

PS In Scotland we have a national drink (apart from whisky) called 'Irn Bru', which it is claimed is 'Made in Scotland frae Girders'... Perhaps this explains why they are so hard to find these days!!
Newer Post Older Post Home