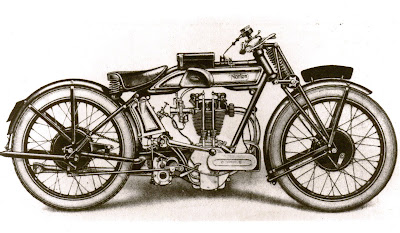 Here's a catalogue illustration of the Model 25 used for publicity purposes in 1927 by the factory. This shows evidence of a clever man with an airbrush (or whatever technique was used at the time) and there seem to be a few variations from the state in which most of them were sent out. The carb. seems to be a TT Amac, and the so-called pneumatic footrests are in evidence. Also the rear wheel is a 'non-detatchable' brake drum type.... interesting, none the less.

Roger: "The technique used in this illustration is most interesting. The image is a photograph using the technique of a (sometimes grubby) white sheet as the background which is agitated so that its movement removes any blemishes and creases during the relatively long exposure (like in this photo). What is unusual about this picture is that it is taken in a studio with frontal illumination on both sides. The shadows form a cross behind the machine whereas outside pictures taken around midday give a direct overhead light with shadow underneath.
Retouching and masking was done on the negative, not difficult as the pictures were taken on a large format plate camera - hence the small aperture for good depth of field and crispness of the image. Masking was done with a white masking fluid which could be washed off . There is a lovely image of George Tucker on a kneeler sidecar outfit in the mid 20s which was published in Motor Cycle. Years later a journalist removed the background mask to reveal that the location was the Little Paddock sheds at Brooklands and the detail of the cars in the background was stunning."
Newer Post Older Post Home