Further to the previous blog entry: I have seen this photo before (there is a copy of it in a war-time issue of Motor Cycle/Cycling) and it shows a 1925 Works Norton as used by Bennett, Shaw, Craig and others at the time. 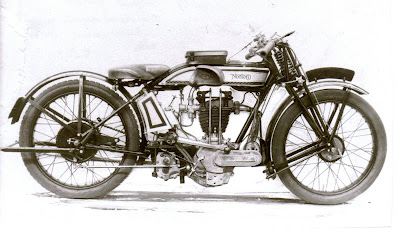 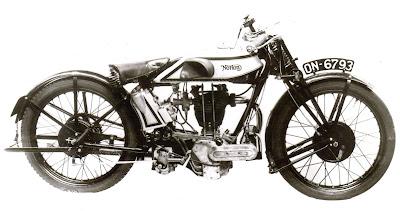 The prints above show a slightly retouched 1925 works bike and the other - rather less doctored - the 1926 version. Both seem to have been used for publicity purposes by Nortons at the time. Note the '25 machine has a non-standard front brake and forks, while the '26 machine is extremely similar to Woods' winning bike (but not it!).
I actually owned one of the 1925 engines during my mis-spent late youth (my wife will tell you I am still in it!). It was installed in a 1928 frame and was, after a long spell in the Murray Motor Museum in the IOM, nicely rebuilt about twenty years back and lavishly described in the Classic Motorcycle as 'Bennett's 1925 TT Winner.' The only parts which came from Bennett's machine are the crankcase and oil pump. These parts literally seem to be all that is left of the 1925 Works bikes of which several were built and all listed in the records.
The records show the 500s as simply OHV. No less than 18 machines were put together for the TT and sidecar TT, some of which are shown as spare bikes. There is little detail by way of the specification. All but one machine were fitted with B and B carbs. The exception was the solo on loan to the Spanish rider Macaya which was fitted with an Amac. All were fitted with C.A.V magnetos. New pattern brakes and oil (pump) pedal are also mentioned. The new pattern brakes refer - I suspect - to the different front brake. There are no comments about the dry sump system.
Incidentally, I still have the very standard head, and the sole racing cam that was still in it (marked TTG). The flywheels in it when I had it were modified ES2 steel ones. The barrel was destroyed in a con rod fracture incident at Brands Hatch....but as usual, I am wandering from the point.
I would not describe the 1925 Works OHV Nortons as Model 18s due to the incorporation of the then new dry sump system but I guess, equally, they were not yet Model 25s. No one has yet been able to tell me if the flywheels were steel in these engines or cast iron: by the time of the 1926 TT they were certainly steel and the dry sump arrangement changed and simplified. However, the mainshafts of the '26 works engines were 1 inch whereas the 1925 versions were still 22mm. When Nortons produced the Model 25 for the 1927 season it, too, had steel wheels but, as is so often the case, there were slight cost cutting changes in that the mainshafts reverted to 22mm and racing cams were not fitted as standard. Further, the majority of the Model 25s sold were fitted with standard CS gearboxes rather than no kick-start racing LS boxes. A bit like a twenties version of the Gold Star.... 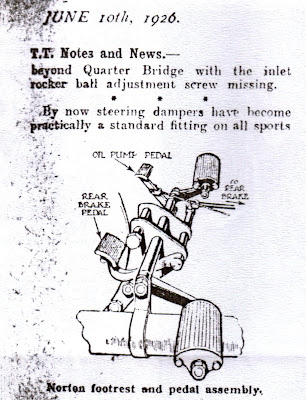 The 1925 Works bikes had a footrest and brake pedal set up like the standard Model 18s of the day - the lot mounted on a short vertical tube located below and to the front of the gearbox lug. If you dropped the plot onto a footrest, the whole lot could twist round and jam the clutch.... By 1926, the Works bikes had a different and more user friendly set-up, the footrests and pedal being mounted on a supplementary pair of plates - see the picture above, which is not in fact a very good sketch. The pedal itself was changed and was virtually the same as that used later on the '29/30 Model 18s/16Hs etc although with a different length spindle. Model 25s also seem to have been fitted with this pedal rather than the standard type in use in 1927.

The outfit Driscoll was loaned for the '25 sidecar TT was a four speeder so bore very little resemblance to the three speed TT bikes. It did of course have a 588 dry sump engine in it, with which Driscoll was singularly dis-satisfied at the time - hence fitting one of his own Brooklands engines for the event itself. The records show the machine loaned to Driscoll simply as 588 OHV.
Newer Post Older Post Home