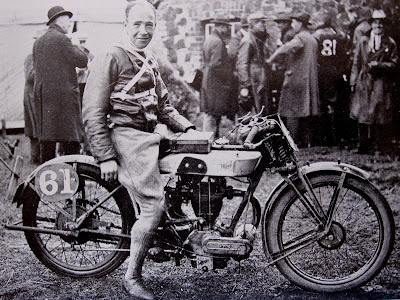 This is Jimmy Shaw at the 1925 Ulster Grand Prix on his OHV Norton; note the strange combination of an early dry-sump lubrication and the cable-operated handpump, just visible above his knee. The (rather poor) photo below shows Jimmy on the same motorcycle leading Alec Bennett on a similar Norton. Of particular interest to me, note the underside of the petrol tanks! This looks very similar to the extension as fitted to the tank of my 1927 racer project. 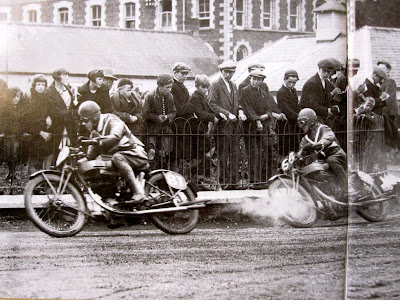 Roger's comments: "This picture is quite a find. The (dry sump) Model 25 was the production version of the 1926 TT winning machine so I don't think that you can call the Norton in the picture a Model 25. The Model 25 also had a different arrangement for footrest and rear brake mounting. The real significance is that the picture shows one of the "Model 18/19s" prepared for the 1925 TT.

Pat Driscoll was loaned one of the 588cc versions by the works for the sidecar race. He subsequently bought it and converted it to the wet sump system that he favoured. Looking at the pictures of his outfit and the Norton team at the TT I can't see the extension to the tank. The angles make it difficult to be absolutely sure in all cases but one of Pat's outfit shows no sign of it. This means that it was likely to have been fitted for the Ulster as a special tank making it more likely that they would have remained in Northern Ireland hence the Jimmy Shaw connection with at least one part of your 1927 flat tank Norton."
Newer Post Older Post Home