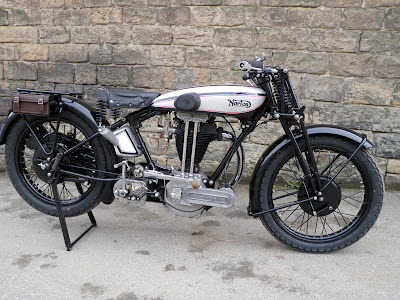 Tim (see this Blog and this Blog) has finished another Norton project:

"Hereby a few shots of my 1930 Model 19, just finished yesterday and started second kick. Messed about with the carb and the tick-over and on retard it is unbelievably low due to new valve guides and a good carb slide. The engine is mechanically quiet as I have had the cams and followers built up and re profiled back to standard. Not too sure about the seat height, I think it could be set a bit lower. Still needs some work on the filler cap for the petrol tank, and the fuel pipe needs plating. I will wait a month before I ride it as we still have all the salt on the roads they put on for the winter. It looks like the magneto chain cover is a earlier one by the raised Norton letters on the casting will have to find the correct one." 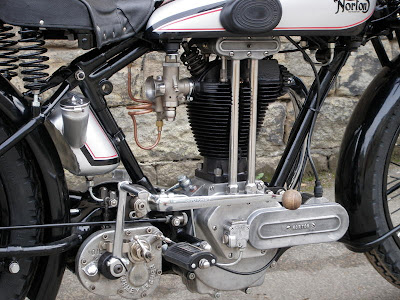 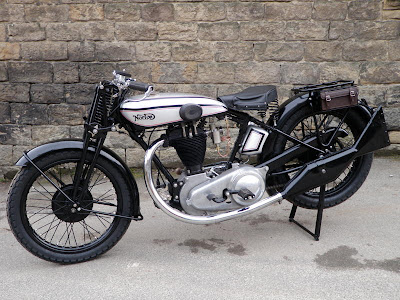 When asking about the history of the Norton I got this story from Tim:

"A good story behind this bike; it's "Buyer Beware". I brought this bike from a friend who had purchased it from a well known Vintage Motor Cycle Club member who had supposedly restored it. My friend paid good money for this bike and when he got it home he could not start it. I had a look at it at the time and we found lots wrong with it. There was a crack in the back wheel drum and the kickstart had dropped off with all the kicking my mate had done. The gearbox kickstart boss was cracked, so we never got it going. My mate never touched it again for about 8 years and then he offered it to me. As I have a 1929 Model 18, I had a spare gearbox and had a batch of brake drums made and had one in stock. I bought the bike paying good money for it knowing I would find lots wrong.

Sure enough it had the wrong piston, a shot big end, worn cams and followers, main bearings shot and an inlet valve completely worn out, but the part of the guide inside the port was not even there, so the valve was only running in about 1/2" of guide. One of the engine pushrods was made from a solid 3/8" bar, ground down at each end to fit. The gearbox was of the pre-1926 fine pitch with a pre-1926 clutch fitted. The forks felt good and looked like they had been re bushed, untill I pulled them apart and found 2 or 3 pieces of steel tape measure rule wrapped round each spindle.

Thankfully the engine and frame are the correct numbers (the frame is marked 588, indicating a Model 19). I completely rebuild it, fitting new mudguards and exhaust system and repainted the complete bike. Luckily I can do all the work myself and had the bits in stock so that made it worth while.

So beware when buying old bikes off old bodgers as they forget what they have done in the past and want top dollar for them; unfortunately, if you want a Vintage bike you just have to pay as not too many of them are around.
Newer Post Older Post Home