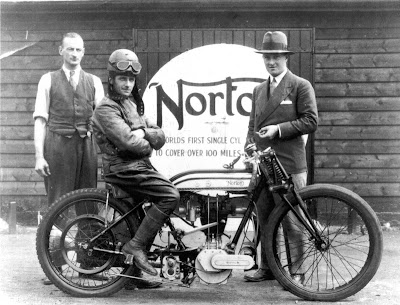 A few weeks ago I got into contact with Roger Bird, volunteer at the Brooklands Museum, writer of the very recommendable book "A Glimpse of the Vintage Years of Motorcycling at Brooklands" and the current custodian of one of the most famous Nortons ever, LPD1. Roger is rebuilding  LPD1 and needs your help, please read his story below:

"LPD1 is well known as one of the most original Brooklands racers to have survived although the name "LPD1" really only applies to the engine as it was the first one that L. P. "Pat" Driscoll produced for the Brooklands Norton works team in 1927. The engine powered the first 500cc motorcycle to achieve more than 100 miles in an hour at Montlhery in June 1927. Pat Driscoll subsequently raced it in both solo and sidecar form with some success including 18 long distance records with Bert Denly in 1928. In its final form it is reputed to have lapped Brooklands at 111mph but was stored in Pat's shed at the Track when he was forced to give up motorcycle racing in 1932 as he was the team leader for the Works Austin racers. 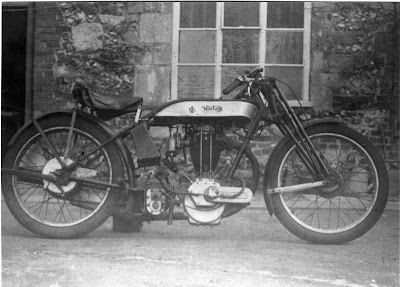 It remained in the shed until the war when at some point it was liberated by an apprentice who constructed a road going version using parts from the shed. The picture taken in 1946 (above) was soon after another two apprentices, Colin and Martin Peal recognised it as a former racer and bought it for £15. They rode it on the road until 1963 when it was bought by Charlie Knight and went on display in Mike Lane's motorcycle shop where it was confirmed by Pat as being the one that had taken the Class F sidecar records. 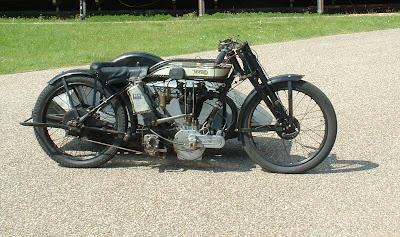 When Charlie died it went to Ken Boulter who had discussed its restoration with Pat Driscoll who had asked that it should not be restored to better than new condition as a museum exhibit. Ken interpreted this as meaning that it should had the well used look of Nortons of the O'Donovan era and the 2006 picture (above) illustrates this nicely as it does look as though it has finished an arduous season at Brooklands.

Research for my book led me to question the authenticity of its appearance as 1927 pictures from Pats album showed an immaculately prepared machine with lots of bright parts including the petrol and oil tanks. These were newly tinned so that had the appearance of bright plating and the black enamel was pristine. Discussion with Pat's son confirmed that his father would completely strip all of his machines at the end of the season and have the frames annealed and repainted. He readily agreed that after nearly 20 years LPD1 should have a makeover to take it back to its original 1920s condition and Ken also accepted that this is the right approach.

The 1946 picture shows that there was a lot of bright metal including the exhaust system and rear brake backplate. The oil tank was a dull solder finish as was the large capacity tank although the tank shown in the pictures seems to be painted silver but unlined. Progress is being made at the museum by removing the black paint on the exhaust and generally cleaning up the rest of the machine. For demonstration runs the front and rear brakes will be kept as they are - slowing a sidecar outfit with two large men requires better brakes than it has! However, for the 75th anniversary of the hour record, we are trying to get it back to how it looked in 1927. For this we need two more wheels with rims for the beaded edge tyres favoured by Bert (but not by Pat) with plain hubs so that the front can be unbraked and the rear fitted with a dummy rim for the V-block brake. Does anyone have suitable components for this?"

Roger would like to add that he has a genuine ex-Bert Denly Amac TT25 body, choke and slide available for anyone who can help him with the wheels.
Newer Post Older Post Home