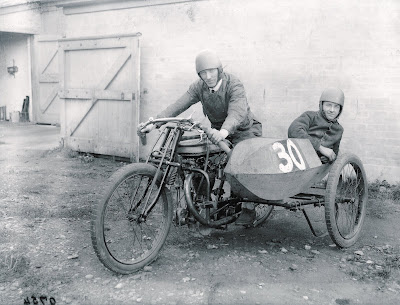 Dan and Bert in a sidecar racer;  it looks like a 588cc Model 19 and the lack of friction dampers on the Druids may date it as a 1923 machine. Note the skid under the sidecar body that was used at Brooklands to prevent a catastrophe if the sidecar wheel failed.

Martin's comments: "The front and rear wheel rims are Westwood section beaded edge rims while the sidecar wheel is a flat center beaded edge rim, all of which date from perhaps 1923-1924, but the MkII Druid forks may be 1925 or later (see below). They have also fitted a wire device taped across the front tyre called a "Carlton Tyre Saver" which skims the tread as you ride and knocks flints out before they cause a puncture. The sidecar body looks to be skinned in doped canvas and flimsy is too strong a word for it! Denly must have been a brave chap to ride in such a thing..."

Roger in his book also discussed this loop of wire fitted to the front forks with insulating tape. During one of his runs, Bert's back tyre picked up a coil spring from a roller blind which embedded itself in the tread and as the wheel went round the spring lashed Bert's backside. After that incident, these "nail catchers" were fitted to all of his Nortons. The characteristic Denly nail catcher can even be used to identify Bert's bikes, like this one.

...and more comments from Roger: "The sidecars' rims were of the flat beaded edge type right the way up to 1932. Bert used the Westwood section until he joined AJS in 1929 but Pat changed to well based rims in 1927 (see the pictures in Doctor Bayley's book "The Vintage Years at Brooklands"). The picture could have been taken before 1924 which is when silencers were made mandatory at the Brooklands track (the Norton is running the standard length open pipe) and Bert didn't join the team until 1923. I am not sure about the Druids but George Cohen states that the Mk II's were introduced in 1922. The sidecar in the picture may be constructed from strip of wood which can just be made out.  Bert would lay face down and feet forward in the chair for the duration of an outer circuit race.
Newer Post Older Post Home