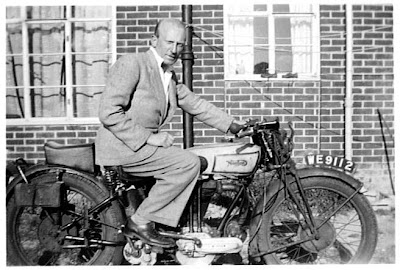 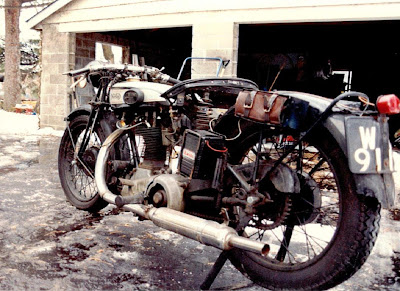 John from Canada sent these photo's of a very nice M19 Norton: "This is my 1929 Model 19 Norton, owned previously by both my father and grandfather before him. The black and white pic shows my grandfather on the bike in circa 1946. The lower pic was taken when it arrived in Canada in 1984, in the middle of the winter.

The Norton has not been in running order for a while, looking at about 15 years at least. I am trying to find out as much history of this model along with any photos and manuals that give precise care instructions before I even think of starting; cleaning the years of dust is my first step."

The engine has enclosed pushrod tubes and an aluminium rocker cover and would have been produced very late in the 1929 season. Further, note the position of the oilpump on the timing chest (as opposed to on the magneto chain cover), typical for the 1929-1930 models. Looking at the CONTENTS list on the right, not that many Model 19s are around these days.
Newer Post Older Post Home