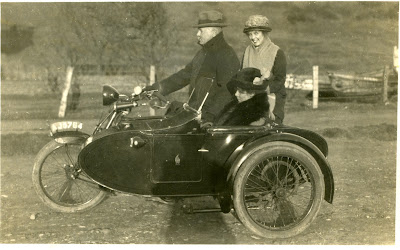 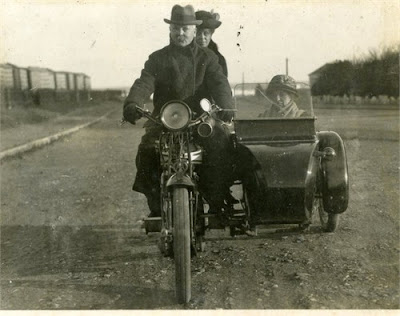 An email from the USA:

"Hello, I'm hoping that one of your Norton aficionados might be able to help me with the attached photos. The gent driving the outfit is my great grandfather William Gegg, and I do know that the picture was taken in 1923 or earlier. I think it may be a Norton, but I would love to be able to confirm this, as the photo is posted on my family's Ancestry.com page and we're trying to identify all of the machinery. If it's any help, the photo was taken in North Yorkshire, near Scarborough.
Thanks in advance for any help!
Gordon
Wisconsin, USA" 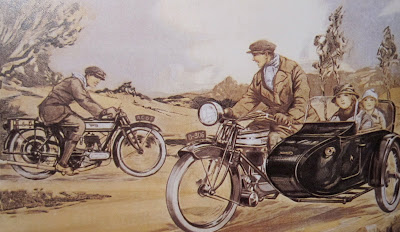 The picture above was copied from a brochure front cover for 1923 and it looks very similar to me; the shape of the tank at front identifies the machine as a Big Four. Noteworthy accessories are the electric lights and does the bike have a front drum brake? The photo below may be from the same 1923 brochure. 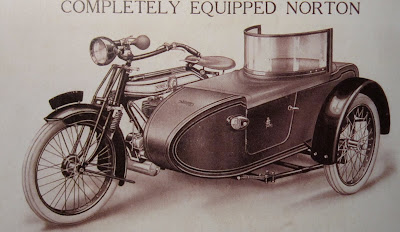 "The younger lady in the photographs was my grandmother, who passed away in 1923 after giving birth to my father; we now know that these may be the last photographs taken of her and that she could have been pregnant with my father at the time. The gentleman, William Gegg owned a popular confectionary and restaurant in Scarborough, the older passenger is his wife Margo, and the younger is my grandmother, named Eveline."

The pictures of the Big 4 are intriguing. Although they may have been taken in 1923 I am not so sure that the machine was new at that time. The North Yorkshire registration is a lot earlier that 1923 as by the middle of the year then next letters were being used. As the series started in 1904 and went up to 9999 the registration date is likely to be around 1920; this could date the outfit to around 1920 which may be right for the motorcycle and sidecar. The electric lighting set would have been available by that date but we need to check whether Norton made it an option as this may be the best dating evidence available. The outfit looks well used so this would support the date.


I think that I can see the rod for the rim brakes in the side on picture. In addition the tax disc for 1923 should show a vertical green stripe. The disc is either not there or is of the 1921/2 type with no stripe.
Newer Post Older Post Home