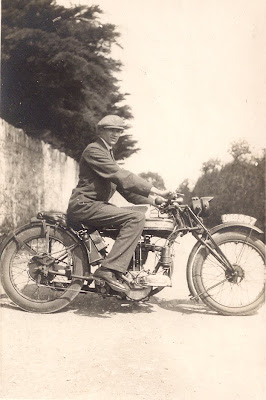 The picture above comes from a postcard found by Martin in the US; Martin had sent me an old postcard before but this one is really special.

The Norton is a 1924/1925 Model 18 and there are a few striking features about this machine. Careful viewers will see that the rake of the front forks is not correct; there is too much "air" in between the magneto and the mudguard. The reason for this is that the bottom fork yoke has been modified; the spindle in this bottom yoke should be in line with the headstock but it isn't; it has been moved almost an inch forward! Brooklands racers often used frames with a longer wheel basis; my guess is that while the modified forks do increase the wheelbasis, the effect on high-speed stability may be disastrous. The yoke could off course have broken but the machine would have landed on the magneto and no accident damage is visible on man or machine.

The Sturmey Archer box is lacking a kickstart mechanism; it has been blanked off where the axis should have been. Further, the rear mudguard is held by flat strips instead of the usual round bars. Both these modifications are typical for Nortons prepared for racing though any amateur could have done the same in his garden shed. And what are the boxes fixed to the oil and petrol tanks?

So what are we looking at; a pukka ex-racing machine or an amateurish attempt destined to fail? Does anyone know the story or recognize man or machine?

"The registration gives the date of mid 1926 but it is a Birmingham registration so it could have been a works bike. The separate oil tank and lack of kick starter could support this. The small front brake would not have been suitable for racing and an 8" one similar to the rear was used on the 1925 sidecar outfits. The Webb forks were an option but the increased trail certainly was not. It might have been modified for sidecar use but would have been an interesting ride as a solo."
Newer Post Older Post Home