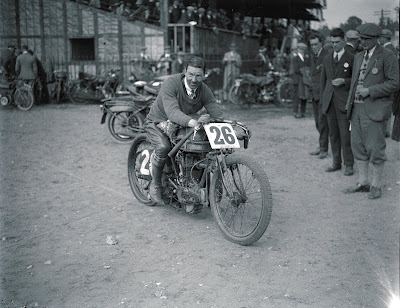 This photo depicts Mr R.T. Grogan on his Model 18 Norton after winning the 1924 200 miles Solo Event at Brooklands. Summarized, he raced a standard looking Model 18 Norton for two and a half hours at an average speed of 80 miles per hour. He won from the famous tuner Victor Horsman (on a Triumph), all of which did not affect his hairdo at all!

A report on the race can be found at page 28 of a Norton's publication entitled 'A Year of Firsts':

"Almost ideal weather attended the 200 miles Solo Motorcycle Races, held at Brooklands, on Saturday, September 6th and some exciting races resulted. Though the entries were comparatively few in the 500 cc class, the only Norton machine taking part - a 490 cc OHV Model ridden by R.T. Grogan - took the lead from the start. The end of the first lap saw Grogan leading with the second man close on his heels, and it was already evident that the race would develop into an exciting duel between these two - Grogan and another well-known racing man, Victor Horsman. The two leaders were both gradually drawing away from the rest of the field and lap after lap saw Grogan still leading with Horsman in close attendance, and by the time 20 laps had been covered excitement ran high. The duel between the two leaders was fast becoming the only thing of interest in the race, and when at 36 laps Grogan drew up at his pit to replenish, Horsman at once took the lead. The feverish haste at which " filling up " was tackled can well be imagined, and after what seemed minutes, but was in reality only seconds, the Norton was once more going - and as consistent as ever. After another six laps - with the Norton a close second - Horsman stopped at his pit and Grogan readjusted the position by again taking the lead - a position he held - and increased - until the end. The finish of this decidedly thrilling race resulted in a win for Norton's. Grogan's time for the 200 miles being 2 hours, 31 minutes, 49 1/5 seconds, an average speed of 79.81 miles per hour, against Horsman's average of 73.24 m.p.h."
Newer Post Older Post Home