One of the more exceptional models produced by Norton. It shares the engine and most of the cycle parts with the 490cc Model 18 but it has a 4-speed gearbox. The gearbox was Norton's own design and primarily developed to be used in a sidecar mount. The box is of the crossover type, the final drive being on the right-hand side of the machine. It has a hand change lever fitted to the tank side. 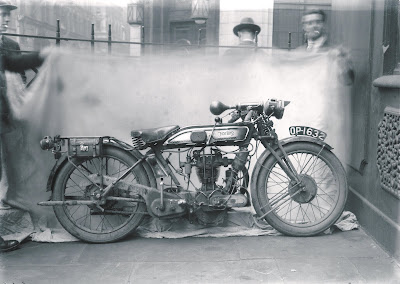 I've never seen one. Few people may have been convinced that you could do with an extra gear and most of them would have chosen for the Model 18 with the well-proven Sturmey Archer 3-speed gearbox. The Model 18 was less expensive too, at 69 GBP compared to 74 GBP for the Model 34. And frankly, the Model 18 looks better.

This one has seen some serious use. It's covered in oil and muck and two carbide generators were fitted. It was dropped on the road already, the footrest is bent.

Interesting too see how an old sheet was used to provide an even background. Was there anyone not smoking in the 1920s?

Added note:
The vintage Norton 4 speed box was the subject of a patent applied for by the company and, surprisingly, Arthur Carroll. This shows Carroll was working at the factory before Walter Moore joined them in '24. The basic principles used in the box - which was not a howling success except for the racket it reportedly made - were used at the end of the twenties in the development of the four speed Sturmey Archer box.
Cheers S
Newer Post Older Post Home