This picture shows Alexander Lindsay, a doctor in the Royal Army Medical Corps, with the Norton he rode in the August 1915 'All Khaki' Brooklands meeting. This race was for members of the armed forces only. He won the half-mile sprint for machines up to 550cc. 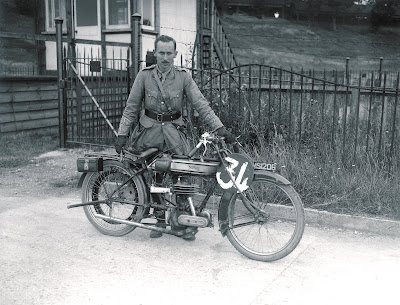 The Norton is a 1915 model as it has the 'Curly N' trademark on the tank, first used in 1915; note that the trademark on the magneto chain cover is still of the plain earlier type. It's a Model 8, also known as the Brooklands Road Special, similar to the Brooklands Special though fitted with a carrier and mudguards. Brookland Specials were not specially built but rather identified; engines would be sent to O'Donovan at Brooklands who would fit them to a frame and test them; Brooklands Specials were fitted with the fastest engines from these batches, guaranteed to do 65 to 75 mph depending on year and model. 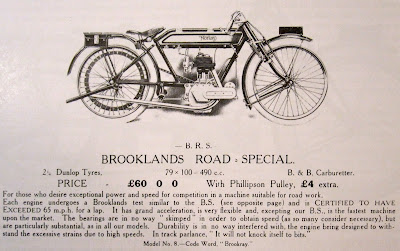 Production engines would vary a lot in performance, mostly due to the difficulties of casting the 'blind' cylinder barrels without a detachable head. Sometimes the cylinder head would sink in the casting and you could end up with a very high compression ratio and the perfect shape of the head and ports. These engines would be kept apart and become the record breakers.

Dr. Lindsay extensively modified his machine. He fitted special forks; tiny springs can be seen where you would expect to find the top links. The carburetter is a Binks Mousetrap. He seems to have jammed metal plates between the fins of the cylinder head in an attempt to improve the cooling of the engine. The belt rim looks very shiny and new to me and there is something fitted between the frame rails, on the left, at the rear of the machine; dr. Lindsay's idea of a brake perhaps?

Alexander is holding a wrench in his right hand, ready to change the plug!
Newer Post Older Post Home