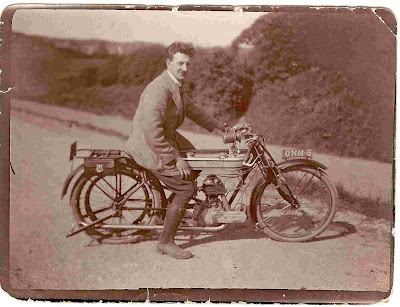 A very nice picture of a Norton with direct belt drive transmission from the engine crankshaft to the rear wheel. No clutch or gears were fitted; push-starting the engine resulted in direct forward motion and stopping would be done by pulling the valve lifter and stalling the engine. Some were fitted with a Phillipson pulley to the engine shaft. This pulley automatically varied the 'gear' under influence of speed and torque.

Direct belt drive machines were favoured by speed merchants as these motorcycles were lighter than models fitted with a clutch and gearbox. Famous names for these machines are the Brooklands Track Special and the Brooklands Road Special, the latter being fitted with mudguards etc. like the Norton in the picture. These machines were guaranteed to do respectively 70 and 75 MPH over the flying kilometre; very respectable figures for a 500cc sidevalve machine.

A note added on the 29th of November when I was contacted by Martin, the discoverer of this photo that is now part of "The Marticelli Collection":

"I have a circa 1920 Model 9. Whilst searching for illustrations of the Model 9 to help get my machine as authentic as possible, I found in an antique shop in Bath, England, a little original picture of a similar machine which I was delighted to buy. The registration number, ONM 6, is that of a works Norton trade plate. There is a picture of works development engineer, Dan O'Donovan in George Cohen's flat tank Norton book standing beside an almost identical bike with the number ONM 4, so one presumes the rider is a colleague of O'Donovan's. Some think he is a young Bert Denly, but others disagree as he looks much older and not that much like Bert."


Martin would be very pleased if anyone could identify the rider; please let me know and I'll forward the info.
Newer Post Older Post Home