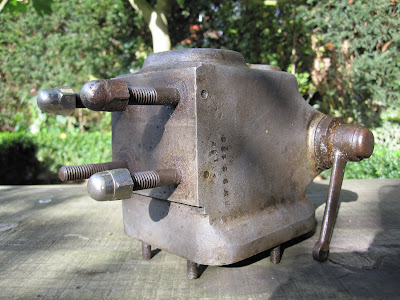 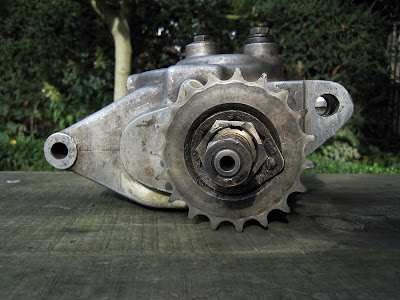 One thing leads to another; Simon helped me out correcting a few errors I made in the previous blog on frames and casually mentioned that the design of the Norton cradle frame has a lot to to with the way gearboxes are mounted in the frame. Early vintage bikes used a construction as exemplified by the Sturmey Archer box in the pic on top; four bolts on the top of the box afix the gearbox to the frame and therefore no bottom frame rails are required. Later gearboxes (like the S-A box in the bottom pic) use a system in which the box is mounted using bolts at both the top and bottom, which is greatly fascilitated by the use of a cradle frame. Simon's words:

Norton Motors and their employee Walter Moore applied for (18/12/25), and were granted in due course (30/12/26), a patent to mount a motorcycle gearbox at the top and bottom.  The patent shows the rear half of a frame of the CS1/ES2 three stay type.  This was a very important idea and obviously a mile-stone in frame design.  Presumably, later users of the design like Brough Superior and (racing) New Imperials paid a royalty.  Nortons first used the new frame/gearbox mounting early in 1927 on the works bikes.  It is reasonable to assume from this that they actually started making a few before the final issue of the patent.  I do not personally think that all that many can have been made initially as, when they got to the IOM, there were problems with the rear brake side of the frame bending as a result of braking stresses.  The brake torque arm anchor point was too close to the rear fork lug and a successful bodge was used for the races, moving it further forward.  By the time of the 1927 Amateur this fault had been eliminated. and the frames of the three OHV bikes supplied by the works to three favoured riders seem to have been like the production versions introduced at the 1927 Show a couple of months later.  Sales literature pictures however continued to show the original faulty design for a while. I guess it was thought no one would notice.

Incidentally, and nothing to do with frames, ignore the fanciful myth about the first CS1 engines being taken over to the IOM by Moore in a hired boat just in time for the '27 TT!