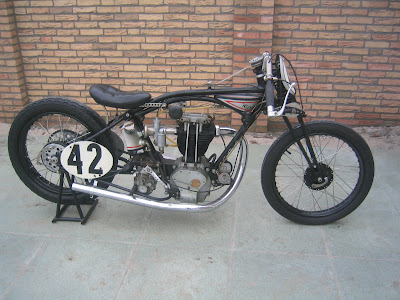 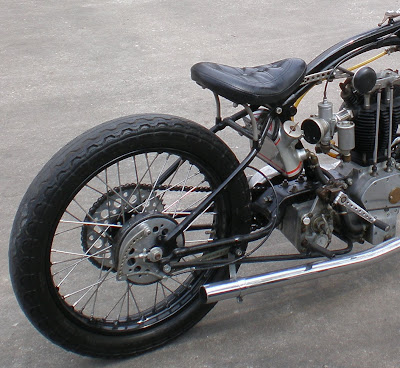 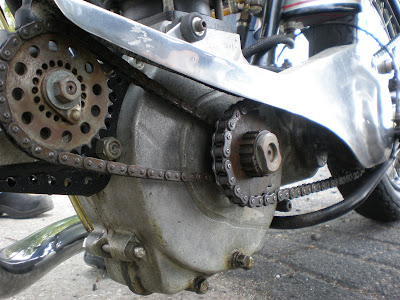 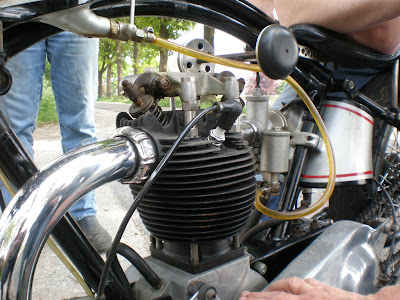 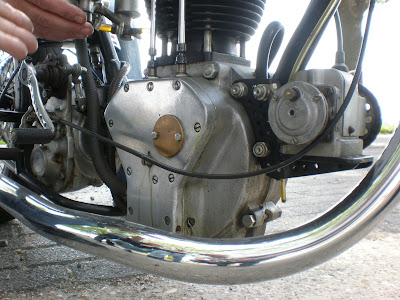 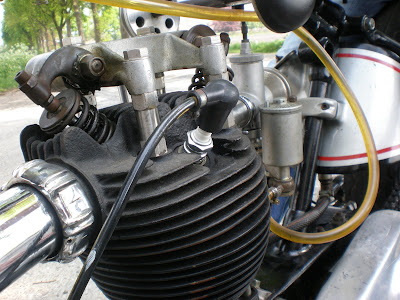 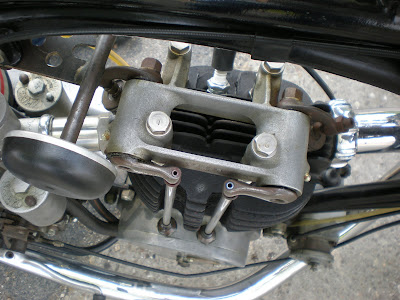 Not so long ago I visited Paul, a Norton enthousiast if ever you've seen one. Paul owns a very nice vintage Norton sprinter. He has had it for a while but no one has been able to tell what it is exactly; which provided a challenge for Simon and what following are Simon's ideas about the bike after spending hours going through the Norton works records:

"The frame is almost certainly from a 1930 M18 or M19. Regretfully, the exact number has not yet been found in the works records but assuming the framenumber was not invented by a previous owner it must be from 1930 as the adjacent numbers are from well into 1930. It is not a speedway frame, as these are very different. The '588' stamped above the framenumber indicates that a longer downtube was used to enable fitting of the taller M19 engine, when required.

The bottom half of the engine is standard ES2 and was despatched from the works in June 1928. These engines used the same dry sump systems as the CS1 of that period, and were fitted with steel flywheels, with a 22mm timing side mainshaft and a 1" drive side mainshaft. Cams were of different design to those used in the M18s etc., in 1929, and apart from having a higher lift, are of the same design as those used in the 1930 engines with enclosed pushrods and cast alloy rocker box.

Moving on to the top half, the barrel started life on a Model 20, from January 1930. The head is very late 1930 or 1931, and can be recognized because the inlet port is angled to the right. Through-bolts are fitted to hold barrel and head to cranckcase. A useful modification but one which cannot be done with the older M18 engines as the head studs and barrel base nuts on these models don't line up. However, on the 1930 M20 and 1931 engines, the stud pitch is the same on head and barrel and the through-bolt modification is possible. The rocker box is a 1930/1931 M20 item although considerably cut down.

The carb as fitted is a type 27 Amal and probably started life fitted to a speedway JAP engine. The gearbox looks like a type III or IV Sturmey Archer, both of which were put on the market in 1930"

Well, in addition I can say the bike has a BTH KD1 magneto, a 'floating' arrangement for the primary drive and it has a seriously high compression.

And it sounds great and goes very well; Paul reckons this one of the fastest vintage Nortons he has ever ridden; click this link to see the YouTube movie!

The question that remains is off course is: Who built it? It looks very similar to a bike built by the legendary Pat Driscoll; however (quoting simon again):

"Driscoll never used this type of frame. He certainly fitted ES2 engines to some of his bikes so his efforts may have been the inspiration for this bike. Driscoll used special flat tank frames with rear set footrests and in some cases longer rear stays."