Aunt Molly, the family dog and a 16H 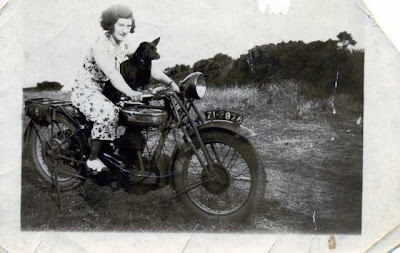 Just a picture I took from the net; a very nice and original 16H Norton. It looks like a 1927/1928 model as it has the larger front break and the more substantial Druid-type front forks. Nice dress, by the way!

And a few weeks later I was contacted by bill who told me the following:

The woman in the photo is my aunt. She is Molly O'Shea who later married Jim Buffini. They emigrated to Australia not long after the war. The whereabouts of the 16H is unknown. The photo was taken at Killegar farm. Located about 10 miles outside Dublin. The farm still exists.

The only detail still missing: what's the name of the dog?!