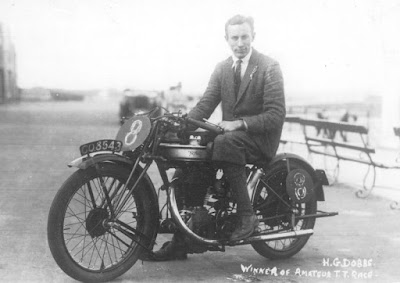 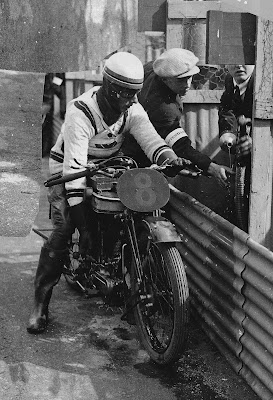 -SG- Back in the late forties I was at school with Noel and Jamie Dobbs from the Isle of Wight  (just across the water from Southampton) and as a matter of idle curiousity, I got in touch with Noel a while back to ask if he was connected atall with Hector G E Dobbs - winner of the 1925 Amateur TT.  The answer was - unfortunately - 'no' but what he did remind me was that he was a great-grandson of Bram Stoker, author of the original Dracula novel!  In fact my not very diligent search for HGED's family proved fruitless.  None the less, I did unearth some information  of general interest about him.

Hector was born in May 1905 and attended the Royal Naval College in Dartmouth from September 1920 to July 1922 - when - unusual for Dartmouth graduates -  he joined the Engineering Branch of the Royal Navy.  By the time of the 1925 Amateur TT, he had risen to the dizzy heights of Sub-Lieutenant and doubtless by then he was earning enough to purchase the Model 18, which he rode in the event.  This machine was supplied to him in July 1925 by well known Norton dealers Pikes of Plymouth and appears to have been a fairly standard Model 18. Without wishing to belittle his win at just under 60 mph, it has been pointed out to me that some of the faster and more experienced riders retired for various reasons... He entered again in 1926 on a different OHV Norton also supplied by Pikes, and this machine seems to have been rather more special - it is shown in the records as having large tanks, a chain oiler, Terry saddle and steering damper.  The few photos I have seen  (not accessible)  also show it to have had an 8 inch Enfield front brake.  Unfortunately he retired as a result of a crash in very bad and foggy weather.  I have not found that he competed elsewhere on two wheels or if so, with what results but what does seem certain is that in the early thirties he was invalided out of the Navy and concentrated on trials driving and racing Rileys at Brooklands (with some success) and on a garage business near Southampton.   He died at the relatively young age of 63 in 1968.

The first of the two photos attached (kindly provided by Bill Snelling) shows Dobbs wearing smart plus-fours, seated on his 1925  machine in the IOM, while the second shows him re-fuelling during the event  - note the John Bull rubbers on his controls - see scan below. 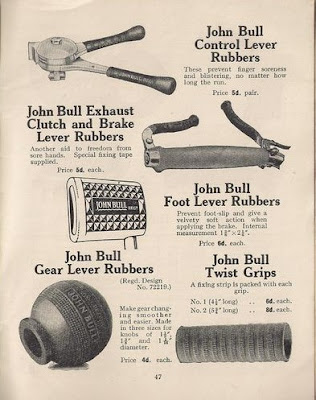 -postscript- Martin in UK has a very original 1925 Model 18 and has noticed the Dobbs photos show the bike has a steering damper.  These were not standard fitments in 1925 and I guess he had one fitted by Pikes when - or soon after - he took delivery.  Martin's personal experience of riding his Model 18 without a steering damper was that it was prone to tank-slappers and after one rather terrifying episode, he fitted an Andre damper and the problem was solved!  Roy Battson, in his very readable little book about his motor-cycling life in the twenties and thirties entitled 'The Land beyond the Ridge,' said that his 1925 Model 18 was the best bike he ever owned but it gave him several scary moments before he fitted an Andre steering damper.  Thanks for the comments!