A home made Brooklands machine 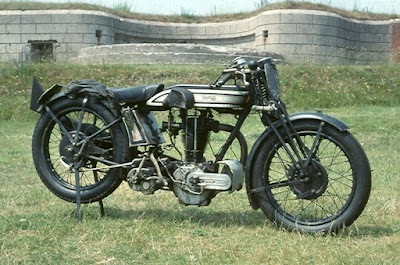 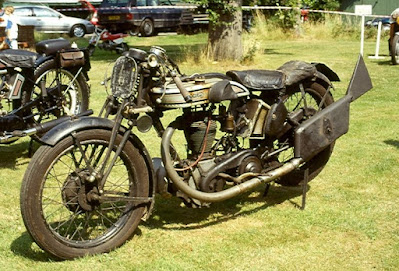 -SG- The machine illustrated in the photos (kindly provided by Chris of the Norton Owners Club) now belongs to Geoff in  Hampshire and has appeared many times on the Norton Owners Club stands at various UK Autojumbles. It has also appeared in a few Norton histories, usually described as a 'Brooklands Norton.' It is in fact a home made special, assembled during the thirties by the late Ted Heward, a bit of a character who lived on his own in a 1920s bungalow with no mains electricity, in Steep, Hampshire. I believe he died in about 1983.

His creation comprises a 1923 Model 18 frame into which he shoe-horned a mid-twenties Model 19 engine and S-A gearbox. He also fitted a pair of later twenties Webb forks and an early thirties 7 inch front brake. In this form he used it at  Clubmans Day events at Brooklands in '37/'38/'39 - and indeed, Geoff has a certificate showing that Ted covered the flying kilometre on the bike in 1939 at just under 80 mph.

By today's standards, these modifications may seem a bit 'Heath Robinson' but hats off to Geoff for leaving it in its original state. I am sure Ted would be pleased!