Rex Judd and a Centenary 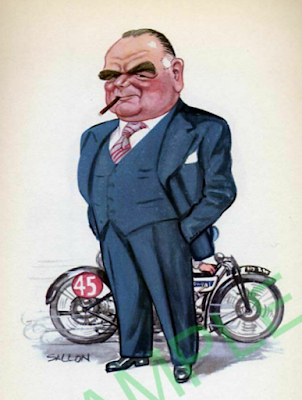 -SG- Back in the early sixties, former Brooklands rider and by then, London motor-cycle dealer, Rex Judd held the first of the Brooklands Reunions - not at the track itself but at the Hand and Spear pub, five minutes away on the other side of Weybridge Station.  These were simply social gatherings and a pub lunch but many well known former track competitors attended. I went to one of the meetings myself and had the pleasure of meeting some of these chaps in person including Bert Denly and Rex himself. The attached caricature image of Rex was one of many by Sallon of UK motor-cycle greats. 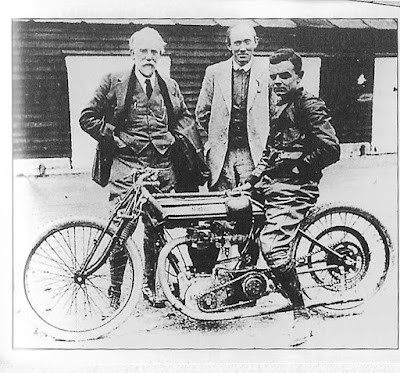 It is perhaps important to remember Rex this year in particular as it was in early March 1922 that he rode one of O'Donovan's machines at the track, gaining a couple of records in the process.  And particularly, this was the first publicly reported appearance of James Norton's OHV engine.  I attach a very grainy copy of a photo taken after these achievements, showing the great man himself, O'Donovan and a very slim and youthful Rex (then aged about 21).  Machine details are none too clear apart from the fact that the engine has been shoe-horned into one of O'Donovan's regular side-valve track machines by use of extended engine plates. It also looks as if one of the push-rods is missing!  The records the team achieved - the British flying start mile and kilometer records at average speeds in the nineties - were short lived as Cyril Pullen achieved better speeds later on the same day, riding a Douglas. 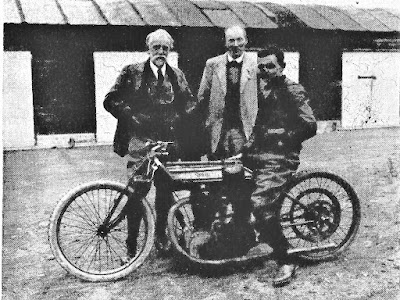 Finally let me use this posting to repeat my thanks to my old friend Barry Tyreman, for giving me a printing block of this very photo a couple of years ago.  It has suffered with age over the years but a friend of Peter Thomson here in NZ has managed to generate some prints from it - copy attached. Nice to be able to get an image from a 100 year old printing block!