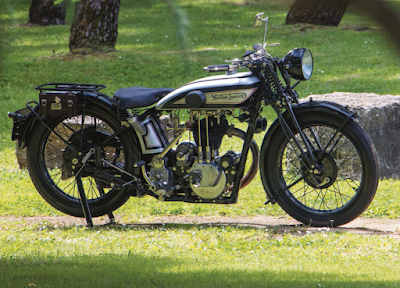 -JdK- Manuel Garriga contacted us a while ago about the JE Norton. He wrote an article about the bike and was kind enough to let us share it on the website.

By the late 1920s, sporting successes had established Norton's reputation as a motorcycle manufacturer. But the Birmingham brand was not limited to making fast and sophisticated machines. The 350cc JE Junior was part of the entry-level range, and had only been in production for a short time. Few units have survived, so finding one as well restored as this one is quite rare. 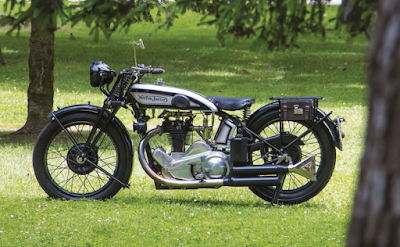 In essence, the Norton JE was nothing more than the 350cc version (hence 'Junior') of the sporty ES2, which had hit the market in 1927 equipped with the 490cc  and overhead valve engine of the Model 18 and the CS1 single-cradle chassis. From then on Norton was going to use the acronym ES2 for the various versions of the single-cylinder with a 500cc OHV engine that it would manufacture until 1963. But the commercial career of the JE model had a truly short journey, as it never caught on with the public. To learn a little more about its history, we turned to Simon Grigson, one of the two “VintageNorton.Com” webmasters, who sums it up as follows:“The JE was unveiled alongside the CJ at the 1928 Olympia Motor Show, but they would not begin to be delivered to customers until April 1929, which seems to indicate rather inept planning on the part of Bracebridge Street, the company headquarters. Neither model sold well, in my opinion due to the effects of the Depression on the one hand, and on the other hand because the market offered many other 350cc bikes that were much cheaper. In addition, the manufacturing costs of the 350cc JE would not be much lower than those of the 500cc M18. In fact, company records reveal that a considerable number of JE and CJ were liquidated at demolition prices well into 1931. "

Among the data collected by VintageNorton.Com is a bike with engine number 1102 - the third JE that appears in the records - sent to the Coventry Motor agency in mid-April 1929, which would not find a buyer until December of that year. 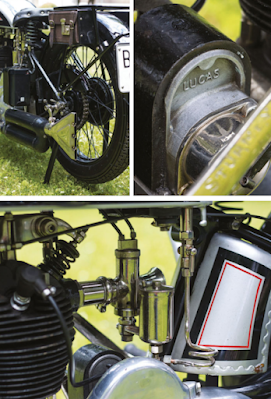 The specimen in the photo’s, which still retains its original Barcelona license plate, was sold new in Catalonia in 1929. “I bought it from a scrap dealer from Puigreig, all disassembled”, says Joan Mundet, a veteran collector from Terrassa who treasures several old motorcycles, mainly of British manufacture, and various Montesa from the fifties. “He sold me the frame, the tires, the fenders and the handlebars. Some time later I found the matching engine - according to the number inscribed on the identification plate riveted on the fender - and I brought the Sturmey-Archer gearbox and the Lucas headlight corresponding to the year of manufacture from the German Veterama fair. Thus I managed to have it practically complete. Then I got the magneto and dynamo, both Lucas. The restoration was long and quite expensive but, as you can see, the result was worth it. The bike works perfectly. "

At that time, in the late 1920s, the faster and more advanced Nortons, such as the CS1, CJ and ES2, already had dry sump lubrication. Joan Mundet's bike still maintains the archaic total loss oil system. Then? "Whatever the official company catalogs say, and unlike its sister ES2, I don't think that any JE equipped with dry sump lubrication was sold to the general public during that period", Grigson assures us exhaustively. 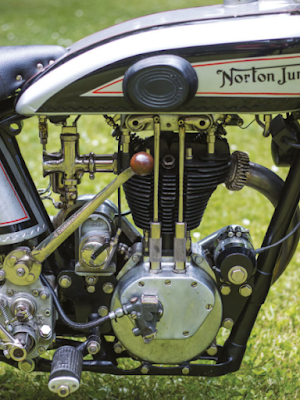 But its most outstanding technical feature, which will have caught the attention of connoisseurs, is the surprising configuration of its OHV stock - which the other VintageNorton.Com webmaster, John de Kruif, does not hesitate to describe as "quite stupid" (sic) - with the springs and rocker arms that open and close the valves arranged in the open and clearly visible, instead of shielded under a cover, as was usual by then. Finding this rather outdated solution in a model that had just appeared on the market must not have pleased the English motorcyclist public. It seems that Norton tried to remedy the matter with some mechanical tweaks on the 1931 version: apart from putting a joint in the gear lever and modifying the magneto drive, they attached side covers to the top of the cylinder that sort of hid the guts of the mechanism from sight ... although the springs were still sticking out both behind and in front. The irony is that in the technical specifications of the official catalog we can read the description "push rods and overhead rocker gear totally enclosed" (!).

The frame is the rigid type without suspension, and the only thing that compensates for the hobbles in the road are the saddle springs. In front we find the Webb fork that came with the project, although the standard equipment for both JE and CJ in this period is the Druid Enclosed Spring. To finish the cycle part, the wheels and hubs are Enfield, fitted as standard by the Birmingham factory. The Lucas high-voltage magneto ignition and the double-chamber "fishtail" exhaust silencer are perfectly in accordance with the standard specifications. 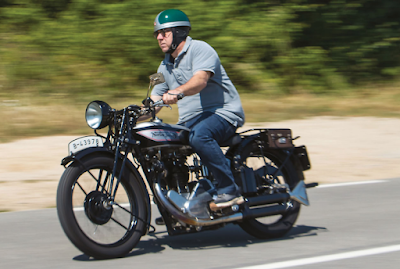 It is not an easy motorcycle to handle for the layman. It seems that we lack hands to attend to the entire repertoire of cams, handles and levers. With the right hand we open and close the air to the carburetor and open the throttle; the gearbox lever, which sits below, and the front brake lever, although its drum hardly does anything (better to use the rear one, stepping on the pedal on the left). With the left hand we manage the ignition advance and retard, we operate the decompressor lever and, finally, the clutch lever. You have to be very aware of what you do, especially at the beginning; If one is not used to riding this type of machine, it is easy to make mistakes. Although you get used tot his after which it is more a matter of simple coordination.

We use the first gear ratio just to get started, once underway almost everything can be done in second and third  gear except for very steep slopes. The shift from one to the other gears should be done firmly if you do not want to find yourselve in a false neutral between the gears. We do not have power data, but we have been able to verify that the JE Junior is not particularly vigorous; It’s 350 cc engine needs to pull the same frame as the 500 model and it feels short on thrust, although the throttle response is very progressive and pleasant. Riding the JE is necessarily calm, it is about playing with the best line of progress and taking advantage of inertia to get the most out of what the engine is capable of giving. Thus, our elegant JE Junior takes us through the Empordà roads at the same pace that was customary almost a century ago, when this type of motorcycle was still new.

Epilogue - If the performance is nothing to write home about, compared to the equivalent models of its time, the motorcycle's greatest interest lies in its rarity and, of course, in the high quality of the restoration carried out. The JE was not lucky in its day: the crash of the New York Stock Exchange unleashed a severe crisis, and this motorcycle - which cost almost the same as its 500cc sister ES2 - barely sold, disappearing from the Norton catalog at the end of 1931. Today, very few JE’s survived, and in the present conditions the experts of the brand give them considerable value.

-SG- Interesting article and photos of the Spanish JE - and good of Manual Garriga to let us use it on the site.  I hope he will not take offence if I point out a few minor errors in the text. In no order of importance ...
The original ES2 was not in fact a Model 18 engine in a CS1 frame, even though it looks vaguely like it. The crank case, flywheels, cams, cam followers, tappets, cylinder and cylinder head were all special to the ES2 - and of course, the magneto was driven from a supplementary sprocket on the drive side mainshaft so that the magneto could be mounted behind the engine.
Once the ES2 went into production (1928), it was fitted as standard with a Best and Lloyd Mark IV oil pump and total loss oiling system.  The dry sump system was an optional extra and relatively few late twenties ES2s are shown in the records with this feature.
The 1928 and 1929 JE  engines were fitted with a cast alloy rocker box mounted on the cylinder head - this is illustrated in the excerpt from Motor Cycling magazine which is on the web site (posted 15/11/2011) but the pushrods were still exposed. 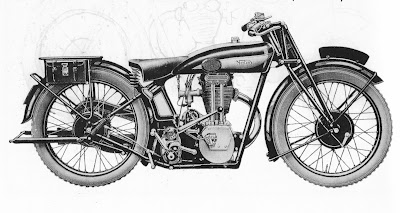 All of Nortons 1930 OHV engines were fitted with a cast alloy rocker box and tubes enclosing the push-rods (above). The rocker box casting dimensions differed depending on the model but in principle they were all the same. The actual rockers and valves/valve springs were still exposed.  This basic system remained in use until 1938 when a better arrangement was introduced with the rockers and valve springs fully enclosed.  Incidentally many OHV models available in the early thirties from other manufacturers still had exposed rockers and valves/valve springs so I do not think this characteristic of the design in any way affected sales.  Norton's stressing of the 'enclosure of the push rods and rockers' in their literature may seem a bit strange but one should bear in mind that up to 1929 all the OHV Nortons had fully exposed rockers and push rods, so their marketing people obviously thought this was a step forward.
Finally, the CJ/JE frame was not the same as that used on the CS1 and ES2 models - it was considerably lighter as it had ony two rear stays as opposed to three on the larger capacity machines.
Newer Post Older Post Home