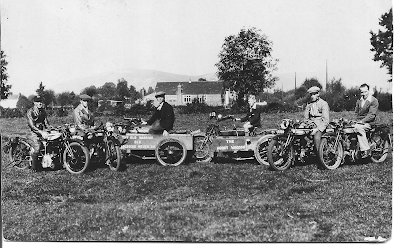 -JdK- A message from Philip in the UK: "My grandfather (Harold Sevier Ham) got hooked on motorcycles in the early 1920's and soon favoured Nortons after going to the TT races. The attached photo shows his collection of machines in 1932, I only wish he had kept the CS1!  Because he served in the RFC during WW1 he felt duty bound to help out during WW2 when they were asking the public to donate metal to "Keep the Spitfires flying."  So sadly some of his machines were thrown in the back of the scrap lorry.  My grandfather is sitting on the CS1 on the left of the photograph.

My father carried on the Norton tradition but did long distance trials on firstly a girder fork ES2 then a 1951 500T, and was quite successful in the MCC trials.  When I passed my test in 1970 he said "better find you a Norton then!". So we bought a 1955 Norton ES2 for £12 and this started my lifelong interest in Nortons. 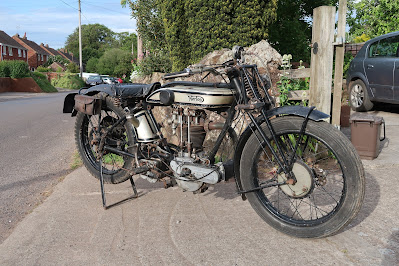 I've only recently ventured into flat tank Nortons when I acquired a 1927 Norton Model 18 and am still working to get it ready for the road.  The petrol tank had turned into a colander when the previous owner parked it up for 7 or 8 years when he suffered from dementia. I've tried to retain the original patina as it looks quite unmolested.  I've consulted the NOC about the Model 18 and found that it was built in late 1927 but first registered in March 1928. I've no history of the machine but noted that it has aluminium mudguards fitted, a Bonniksen speedo and an Andre steering damper; I wonder whether someone did a bit of Clubman's racing with it?  A photo is attached to show the machine as I bought it."