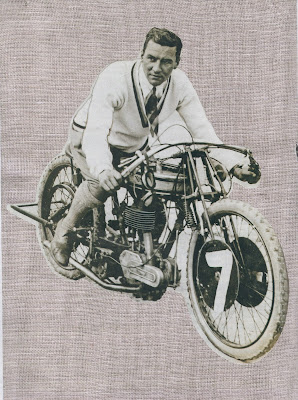 -SG- Back in January 2010 we had a couple of postings about Terry Grogan and his Brooklands successes on a Model 18 Norton.  I have recently been sent a photo of him taken in 1922 - with a 16H, on which he won the Two Lap solo handicap at the track in June.  During the thirties, he went on to race Frazer Nashes at Brooklands.

Terry Grogan was a regular in the Royal Navy having joined as a Midshipman in 1917 and served on numerous vessels during the twenties and thirties. Sadly (by then having attained the rank of Commander) he lost his life in the sinking of HMS Hood in 1941 by the Bismarck - itself sunk three days later,  both with enormous casualties.

In case anyone is interested, a memorial to the crew of the Hood is to be found in Boldre Church near Lymington in the New Forest.