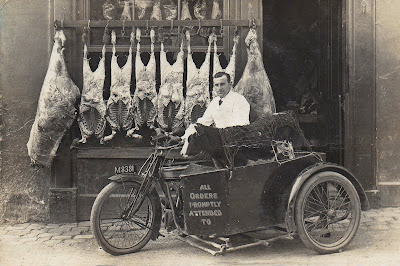 -JdK- Caroline sent this photo of her grandfather, a Norton and a calf in the sidecar. Her grandfather was born in  1886. The stirrup type front brake and the appearance suggest a late 1910s-early 1920s Model 3 1/2 HP.
Roger commented: "The Cheshire M registration ended in early 1920 so this would date the registration to late 1918/early 1919.  However, I am looking at motorcycle production after the Great War and very few machines were made before mid 1920 so I suspect that it was a wartime production used by the military as all civilian production was banned in late 1916. As the models didn't change until well after the war ended it will be difficult get get an accurate date but I would suggest 1916."
Newer Post Older Post Home