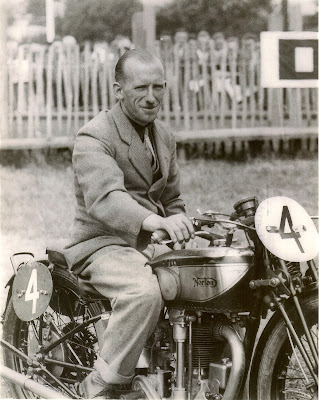 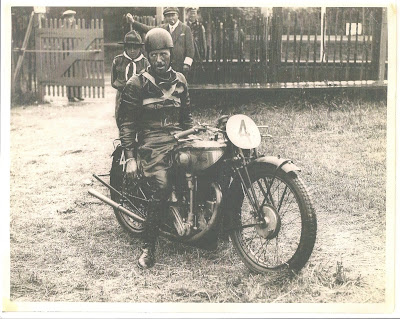 -SG- The works Nortons of 1930 may not have won the TT but none the less, the new Carroll engine performed well and showed great promise. Various photos exist of the works 500s at the TT and from these and the existing records, it is clear that the three stay frame was used, the engine had a horizontal inlet port, and the gearbox was the Sturmey Archer three speed N type with positive stop foot change. HW Webb forks, a Square ML magneto, Enfield rear hub and seemingly 7 inch Horton front hub with cast alloy back plate completed the general specification. I attach a couple of photos from my records - both provided by the late Peter Roydhouse incidentally -  showing a cheerful looking Jimmie Simpson in the paddock before the TT - and after it, looking distinctly bedraggled, following the appalling weather (above).  He finished  third behind the speedy Rudges of Wal Handley and Graham Walker.  His average speed was just 2 1/2 mph slower than Handley so all in all, a pretty good performance.

Fast forward to the end of August and Jimmie was competing in the Swedish GP - the only works rider there - which he won at a record speed.  It is pretty certain that his mount was his TT machine and it was left behind with the Nystrom company - Norton's Swedish agents - after the event. I assume Nystrom's bought it but Nortons had such a good relationship with them, that it might have been initially on loan. Apart from this conjecture, why would Nortons not return a successful works bike to the factory? Perhaps because the racing machines with three stay frames were being phased out and replaced with versions using the two stay cradle frame, as used by Woods in the 1930 Ulster GP.  Jimmie also competed in the Ulster - retiring at the end of lap 9 but none the less achieving fastest lap despite considerable rainfall - but I have no details  or photos of his machine so don't know if it was like Stanley's or if it was still a three stay CS1 as used in the TT and Sweden. 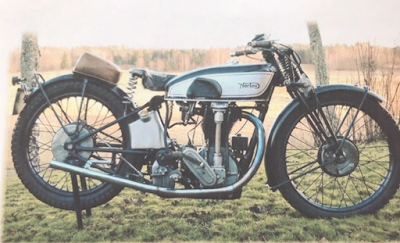 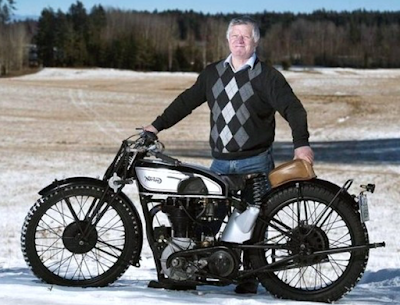 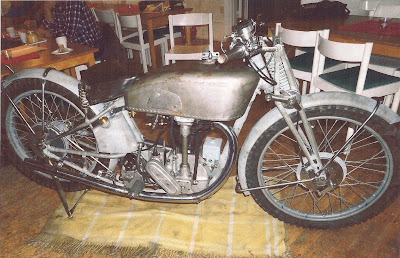 Algot Nystrom raced the Simpson bike in local events in the early thirties and around 1934 it was taken over by Rolf Gullick who continued using it in competition for a few years.  I do not have details of its post-war history until the late forties when it was owned and used as every day transport by the late Lars Olsson.  Lars sold the machine in the early fifties, only to buy it back thirty years later in a somewhat mutilated state.  He kept it for many years with the intention of restoring it, but although some work was done, the project was never completed.  About five years back, it was bought by Hans Bergentoft who has had it carefully restored by Bosse Brolin. A photo of it during the rebuild is attached, along with  up to date photos kindly provided by Hans. I have also been sent photos taken by Bosse of the N type gearbox, which appears only to have been fitted to the 1930 works Nortons and which I hope to include in a separate posting when time permits. 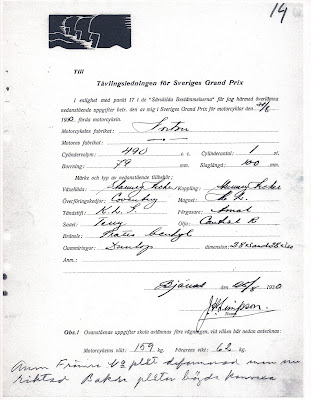 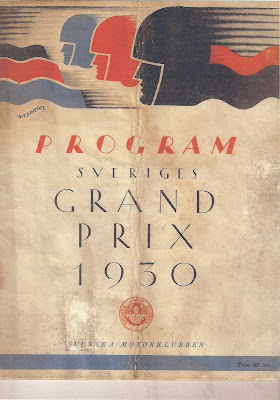 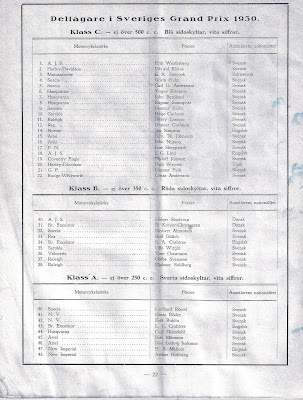 And a records anomaly ...

It would be nice to tie in this machine with an entry in the existing records but this has proved impossible, for the good and simple reason that the records are seemingly incorrect and incomplete! The existing frame and engine numbers are respectively 40256 and 48293 and show no signs of having been altered. But, as Peter Roydhouse discovered when he looked into this matter a few years back, engine numbers 48291 - 48296 relate to Model 18s but, written inside the ruled lines in the ledger, are additional entries for three 1930 TT CS1s - but not this one. Peter suggested that perhaps the Race Shop had asked for some numbers but those allocated went unrecorded at the time, the matter only coming to light when some of the racing machines were sold off. The first of these had frame 40252 and NS gearbox and registration number OF9502. It is shown as being loaned to Jimmie Simpson in May 1930, then loaned to Norton's Dutch agents Wyngaarden in June '31 and finally supplied to J M Sugg in August 1931. We have mentioned this before on the web site - see posting of 5/11/2013  - and the bike Woods used in the Ulster had this same registration number. The second machine, with frame 40258, had registration number OG2026.  This was loaned first to Drew McQueen in July 1930, then to Jimmy Shaw and finally sold to Norton's Belgian agents A Breslau in December 1930.  The final machine has very sparse details shown - no frame number and engine number the same as  OG2026!  It was apparently supplied to a London company called Martins in April 1930  (never heard of them so can't comment!) and then to a retail customer N V Booker of Rugby  in May '31.
Newer Post Older Post Home