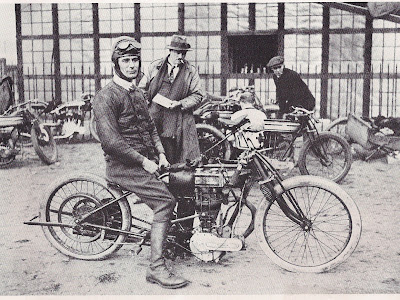 -SG- I recently came across this uncaptioned photo of Vic Horsman mounted on a track Norton with a considerably lengthened frame.  I sent it to Roger for further comment which I give below.  Thanks!

"Vic Horsman rode a Norton until the end of the 1922 season when both he and Rex Judd left the O'Donovan team - he went to Triumph and Rex to Douglas and this paved the way for Bert Denly to join the team.

The picture was probably taken after the Championship Race event on 21 October 1922 at which he won Classes C and F and was second in Class D. The engine looks tall for the 490 version so it would be the 596 version that he rode in Class F and the sidecar for Class F can be seen on the right of the picture.  The picture was taken in the paddock by the Fork with the 1921 grandstand in the background. There are three Nortons behind Vic (his birth name was Vincent) and Don is working on one of them. There would have been a 490 for Rex, the second Norton for Vic and one for Don in Class F.

The Norton on the left is probably George Tucker's outfit as his race number was 5 in Class F. The V-twin at the back is probably George Brough's Brough Superior on which he competed in Class E for solos up to 1000cc. I don't know who the reporter is!

Vic liked the very long wheelbase machines for Brooklands as they gave extra stability in a straight line which was the purpose of the banking although the Fork was a sharp kink. He continued with the same type of frame when he switched to Triumph. From experience I can say that even the slightly extended frame on LPD1 is great for a straight line but truly awful on the Mercedes Benz track (the short present track at Brooklands) where I was overtaken by a 50cc racer on the bends! The Model 18 used for Mountain Races is so much easier to handle."