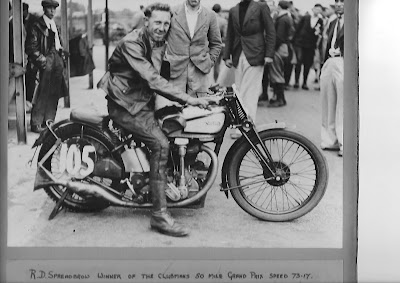 -SG- I have mentioned my old friend Jack Bindley before on the site. He grew up in the Wembley area and one of his friends was a chap called Bob Spreadbrow. Jack introduced me to Bob a good while back now - probably in the seventies - and Bob has recently been in the news as his nephew Graham Leake has been researching (successfully) the whereabouts of his Wooler ME1095. I should add that Bob was a nephew of Ron Wooler and worked at the firm during the late twenties. You may wonder what all this has to do with pre-war Nortons and the answer is that Bob bought a new 500 Inter in 1934 which he used successfully in the Clubmen's Fifty Mile event at Brooklands as well as for general transport. Jack recalled that he and Bob used to spend the occasional Sunday morning going flat out along the newly opened Watford by-pass - Jack on the 1931 ex works OK Supreme he bought after being disappointed with the 1931 ES2 he bought new. According to Jack, the OK was a few miles an hour faster than the Inter but of course, Bob's recollection might well have been different!

Apparently, long after he had disposed of the Inter, Bob thought it would be good to get it back and he traced it to a lighthouse keeper in Scotland, who assured him it was safely protected from the elements. Bob went to see it and was saddened to find it had corroded to the extent that it was suitable only as scrap!

Graham has kindly sent a scan of Bob and the Norton at Brooklands - many thanks!

-Roger- RD Spreadbrow raced a Norton at Brooklands from March 1933 to August 1935 but his only top three finishes were winning the Clubmen's Fifty Mile Scratch race on 28 July 1934 and a third place in the Clubmen's Three-lap Round the Mountain Race in April. It seems very unlikely he bought it the bike new in 1934 as I believe it to be a 1932 model as the damper was discarded in 1933 and replaced by the rebound springs although the damper was added to the springs for 1934.