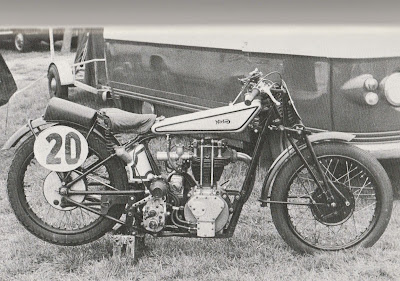 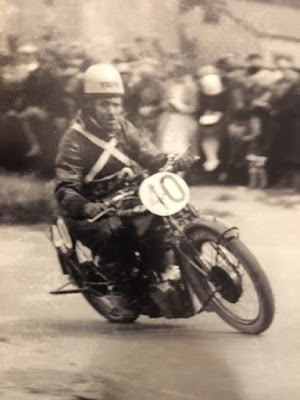 -SG- I exchanged several interesting messages with Neil during the latter part of last year - Neil is the current owner of one of the late Ron Beecroft's 1929 CS1s, which was supplied to Pillings of Bury (Lancashire) in June 1929.  Neil has carried out a lot of investigation to try and establish early registration details etc of his machine and these are, I think, still ongoing.

However, in the course of these enquiries he established that Harvey Pilling - one of the sons of the business owner Jack Pilling - rode a dry sump ES2 in the 1929 TT, retiring on his fourth lap.  Thanks to Neil, an action photo is attached and I was fortunate to locate the bike in the records.  It seems to have been rather special, being described as 'Mr Moore's Special for the TT' and was supplied with spare sprockets, spare HC piston, long pipe and was fitted with a twin float Amal carb. (At this juncture - as the type 29 Amal was not yet in general production - this is likely to have been one of the Amal-Binks carbs. which were fitted to various 1929 ES2s and CS1s.)  Harvey Pilling apparently rode twice more in the IOM - finishing 16th in the Junior in 1932 and retiring in the '47 Junior Clubman's event.

More recently, we have been contacted by Paul who, it seems, actually owns Harvey's 1929 mount.  This was owned for some years by the late Wilf Green and was used for Vintage racing by Geoff Pollard in the late seventies/eighties. A shot of it in its then state is also attached from which sundry modifications can be seen. Paul wants to return it to its original specification as far as possible.
Newer Post Older Post Home