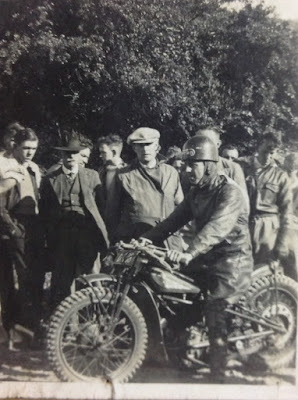 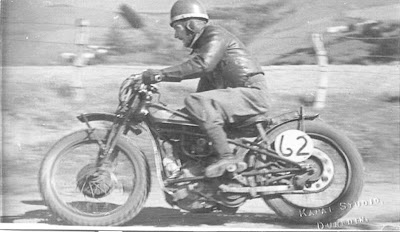 -SG- ... when it's 'Bluey!' Bluey was the nick-name of the special built in the mid thirties by Josh Mewhinney down in Otago in the south of New Zealand. It comprised a 1930 DT Norton frame and forks and a very special Indian vee twin Altoona engine dating from 1925. It had considerable success in hill climb and grass events with at least two different riders and most of the engine still exists, albeit with different heads and barrels. However, what became of the DT Norton frame is unknown ...

The photos show it in action at Bethunes Gully Hill Climb (near Dunedin) in 1947 and in the pits at another un-named event. It is thought that it was not used much later than 1948/9. Thanks to Bill and Alain for the photos.
Newer Post Older Post Home