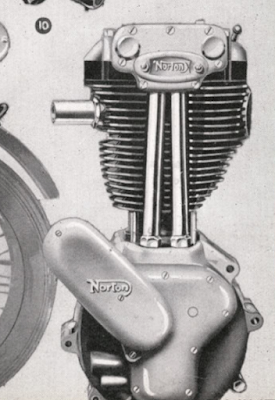 -SG- I see we have had rather a long gap from the last posting of literature kindly lent by Ian. No good reason so no excuses!

1938 was a year of change Norton-wise, in that the cast alloy rocker box and exposed valves on the OHV machines - first used in 1930 - was abandoned in favour of a new design of rocker box with enclosed valve springs. This visible change to the OHV units was not the only one, however: internally the cam followers on both OHV and SV engines were changed to a type where the contact surface with the cam was entirely flat - a design which remained in use on standard production machines up to and including 1946, but was NOT used on the WD16H. Also shown in the 1938 literature is the so-called cow's udder silencer -  to my mind a rather strange design but who am I to query Norton's then marketing experts eighty years later?  Don't think I have ever seen one in the flesh, so to speak.
Newer Post Older Post Home