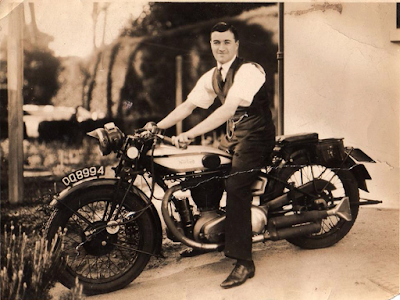 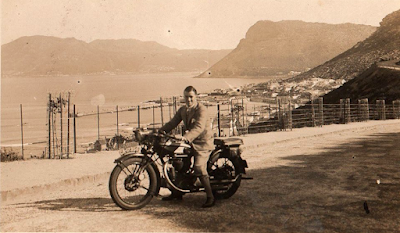 -SG- Evan in Africa sent these very nice pics of his grandfather on his 1929 Model 18 Norton. In his own words: "Attached are 2 photos of my Grandfather PJ (Percy Jack) Wannerton on his Norton motorcycle. He imported this motorcylce into South Africa in the late 20’s early 30’s. The close up photo shows the bike at his home in Cape Town, with UK number plate, from my research it appears to be a tax free export registration number. The other photo is on Boyes Drive, above Kalk Bay in Cape Town, with it’s Cape Town number plate."

it is a 1929 Model 18 - one can see quite clearly the identifying features of the magneto out in front of the engine and the double barelled silencer.  Also - just visible in the upper photo - the exposed overhead valve push rods.  For some reason the tank is fitted with knee grip rubbers of the shape used on all the 1930 range but Nortons might have started using them late in '29.
Newer Post Older Post Home