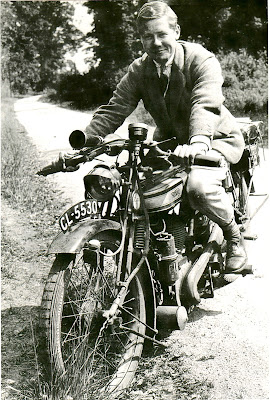 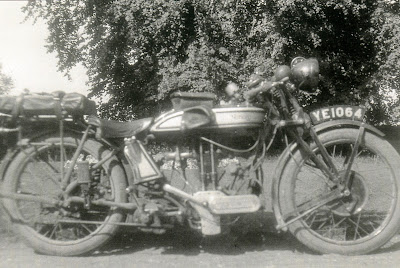 -SG- Richard - plus very smart 1928 Model 18 - has been in the Isle of Man during the past week for the Classic TT events and other motorcycle-related activities. While there, he was approached by a chap who introduced himself as Mr. Edwards, admired the Norton and then, to Richard's surprise, gave him a couple of copy photos. These show his father or  perhaps grandfather, C J Edwards, on an early twenties 16H and also a 1927 Model 25 he owned later on. As if that was not enough, the engine and frame number of the 16H were written on the back of the photo and the engine number only of the Model 25 (registration number YE1064). Thanks to Richard, scans of the photos are reproduced above.

Armed with this information I have had a look at the records;  the 16H, with engine number 4249 and frame number 6529S dates from around November 1922.  No dealer or end-user details are shown.  But the Model 25, with engine 33383 had frame number 25351 and was unusually fitted with a TT Amac carb.  It is shown as 'specially tuned.' Other variations from standard were the fitting of a Terry saddle, standard carrier and tool bags.  The despatch date is not that clear other than December 1926 and the dealer's name was The Service Co. Ltd, Holborn.  But here we come to the interesting bit - the customer is shown as none other than F Lutyens Beart who took delivery in January 1927.

Let me add an aside here - Roger (thanks!) has uncovered that Beart's full Christian names were actually Herbert Maynard Francis Lutyens. No wonder he just used F. L.  in later life! There may perhaps have been family connection to Sir Edwin Lutyens, the famous architect (1869 -1944). 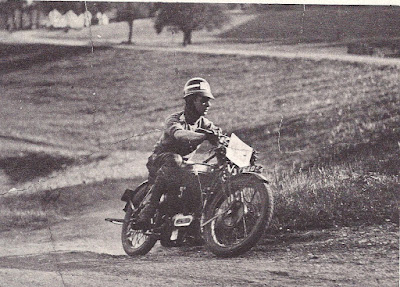 My small collection of Norton related books includes Clew's biography of Francis Beart, entitled 'A Single Purpose.'  In it, he mentions that Francis obtained and raced a Model 25 in 1927 and better still, a snap of him on the bike at a Crystal Palace event shows the same registration number YE1064 as Mr. Edwards' bike (directly above).

Little did Mr Edwards know that his father's/grandfather's bike was formerly owned by someone as illustrious in Norton racing circles as Francis Beart! Mr. Edwards has no idea of what happened to these machines but if either still exists, Richard has his address and can send on the details.
Newer Post Older Post Home