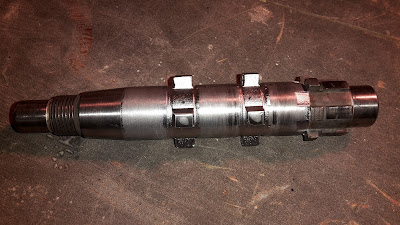 -SG- Richard's 1929 Model 18 appeared recently on the site following a cam spindle breakage, happily now resolved. More recently, he reports that it has been jumping out of second gear and while it appears the second gear pair in use were not that good, Richard felt that the situation would be greatly improved by building up the worn area of the layshaft where the sliding gear contacts, using hard chrome. He advises - and we repeat this on the basis that we can't take responsibility if it doesn't work for you -.

-Richard- I didn't do any preparation of the "to be plated" area. But what is important is to carefully measure the ID on the sliding gear on the layshaft and the layshaft OD to make sure that not too much chrome is added. I added 0.002" to the surface (0.004" on the diameter) and this, at least in my case, was the limit. If too much is put on then it would be difficult to remove except by grinding. I needed to do some hand fettling afterwards using a small oilstone with the layshaft in the lathe, to clean up the extremities of the hard chrome, but the surface is otherwise being used without finish grinding. It is a good sliding and rotating fit without the "slop" that I had before.

I also fitted a pair of NOS second gears but  I think the layshaft hard chroming would have solved the "falling-out-of-gear" problem without new gears - I  only fitted those as I had a broken tooth on one. Anyway, it is now reinstalled in the bike and is working perfectly.
Newer Post Older Post Home