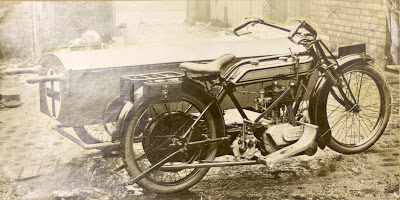 -JdK- A 1915 WD Model Big Four Norton attached to a sidecar. The photo was contributed by Rich in Belgium and was taken apparently on 16 March 1916. According to Mike: "This is the new Big Four for 1915 as it has the new dropped top tube on the frame, and the first year of fitting the early pattern Sturmey Archer gearbox, the cutout in the petrol tank for valve removal and replacement, only used on 1915 models."
Newer Post Older Post Home