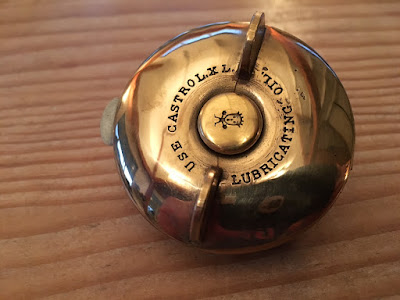 -SG- Best and Lloyd tank filler caps were fitted by Nortons throughout the twenties and up to about 1934. Four sizes were used, to fit tank necks with nominal internal dias. 1 13/16", 2", 2 1/4" and 2 1/2". Note that these are NOMINAL sizes: for some unfathomable reason, Norton tank neck internal dias. are all slightly larger. The smallest size was used on both fuel and oil tanks, and there was a minor design change in about 1923, when the hinge plate was provided with a protruding tongue opposite the hinge, engaging in a corresponding slot in the tank neck. This became standard on all other sizes. Later in the twenties caps fitted to oil tanks carried the message 'Use Castrol XL Lubricating Oil' - or 'Use Castrol R Lubricating Oil' in the case of those fitted to racing machines such as the CS1 (usually the 2" size). 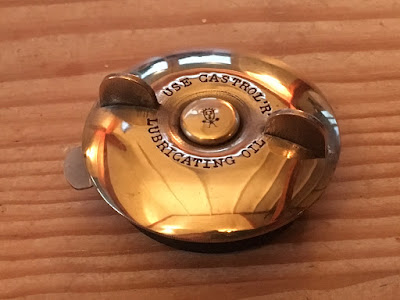 David in New Zealand (nzsurfer@gmail.com) can now provide all of the Best and Lloyd caps and the photos show those bearing the oily message - as well as the stamped imprint of the Best and Lloyd Matchstick Man trade mark. They also have external knurling like the originals. Seals used are Nitrile for the oil tank caps and Viton (a petrol proof synthetic rubber) for the petrol tank type and the caps are available in polished brass, suitable for nickel or chrome plating, although the largest fuel tank size is in cast aluminium as originally used. Caps fitted with centre stems with the breather tube - again used on machines with sporting pretensions - are also available. Contact David direct for more information. 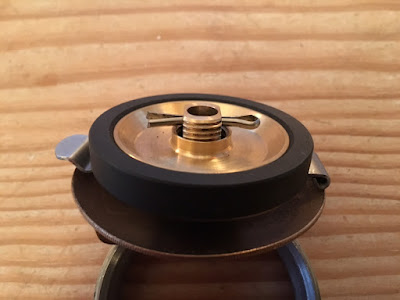