-SG- Andrew's 1928 CS1 has  been on the site before but we have not previously considered the Brooklands silencer fitted to it. Unlike the majority of Brooklands 'cans' fitted to restored bikes - Nortons and otherwise - which are off-the-peg replicas of sometimes questionable quality - Andrew fabricated his pleasing example following the printed regulations of the BARC to be found in the 1927 edition of 'Speed and How to obtain it' (by J E G Harwood). He has provided these as a response to the frequent questions he has had about the silencer and scans of the pages concerned are attached (below). A small word of warning here: Roger, who has done considerable research into the Brooklands silencer, has told me in the past that there were various detail changes to these  rules over the years. 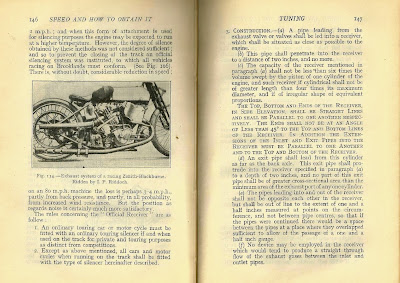 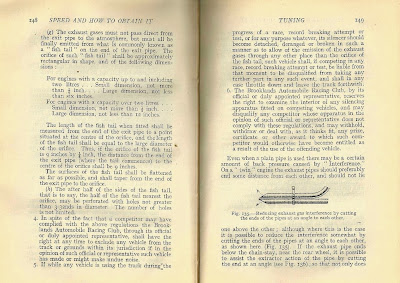 How well Andrew's handiwork would stand up to a few hours' hammering round the bumpy Brooklands track I am not too sure as it does not incorporate any external strengthening which seems to have been the norm in quite a few of the originals - see photo of my own example - and I would hazard a guess it is a good deal lighter. Mine weighs a substantial  8 lb.(3.6 kg) - a lot of weight for a '250' to carry (it came from one of Les Archer's works New Imperials).