CS1 cams and other matters


-SG- This 1961 letter from John Joiner to the then editor of the VMCC bulletin is of interest. Incidentally, it produced no replies of any sort! Many years later I asked John about it and he said - quite understandably - that he could not remember a thing about his CS1s. So... does anyone have any input on the E4400 cams? I believe the other information he gives regarding the 3788 and 2531 cams is basically correct. 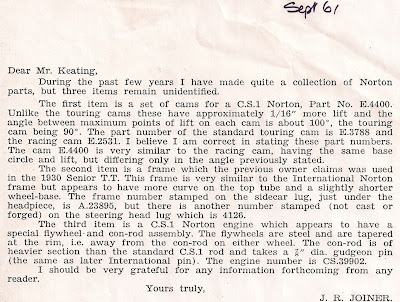 The CS1 engine 39902 shows up in the records as a standard CS1, despatched to Yorkshire dealer Alec Jackson in early 1928. It is my guess that the 7/8" pin con rod and the work on the flywheels will have been carried out by a later owner in search of more reliability and perhaps speed. The frame he mentions is intriguing too. The numbers mean nothing and are totally out of sequence for 1930 machines: further, they are stamped in the wrong place for CS1s (and ES2s for that matter) of the period. And the A prefix... surely nothing more than a co-incidence but post war Norton numbers  started with A for 1946, B for 1947 and so on.