-SG- Bert has appeared several times on the site and here are a couple more photos of him sent to me while abroad recently. The first of them (above) shows him with the usual cigarette on the go, and was taken in April 1925. The bike - I see it appears in Roger's "Vintage Years at Brooklands" book - had apparently been used to obtain some records at Monza in July 1924, when it sported a drum front brake. Back home - assuming, perhaps rashly, it is the same machine and not just the same registration number - it has earlier rim front brakes which are all coupled up and ready for use. The young man alongside may be  - thanks Roger - D R O'Donovan's eldest son Kevin. Not sure what reception he would have got from his mother on returning home - his jacket looks a bit oil besmirched! Incidentally, Martin tells me PC4991 - a Surrey registration number - probably dates from early 1923. 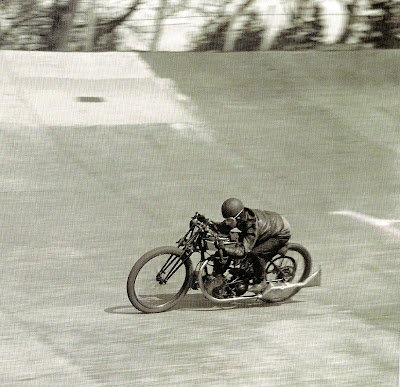 The photo above, dating from May 1928, shows Bert hammering round the Brooklands banking on one of the Nigel Spring Nortons - a good view of the bike showing the Brooklands 'can' and the unpainted fuel tank.
Newer Post Older Post Home