-SG- This Model 18 is owned by my friend John in Timaru and has just completed it's first rally. It left the works as a 1928 Model 18 with a Terry saddle, B and B carb, special knee grips and twist grip throttle. Despatched to Tozer Kemsley (the agent for Australia and New Zealand) on the 12th August 1927. The despatch record also shows that this machine was built to 'New Zealand specification' as were various others shipped out at this period. Full details of just what the specification comprised are unclear - apart from the fact that a Lucas KSA1 magneto was fitted instead of CAV or ML.

John: "This motorcycle was owned and later sold by my father during the 1930s. It was purchased by an uncle in 1945 (after several other owners) and returned to racing. It then lay unused for many years until he wished to dispose of it during the late 1960s, by then becoming a sorry sight and worth practically nothing. I was a lad of around 12 and showing interest in motorcycles and so it came that my father and I took it to the family home where it lay dormant until I eventually brought it to my own house in 1981.


Other motorcycles and restorations meant little was done for some years. Restoration slowly began in 2005 but it was not until I attended the 2007 Banbury rally that I realised that I had been somewhat foolish for not having done something about this bike years earlier, especially given it's history and family connections.


Some work was outsourced. Alan Hull (a local) worked wonders with the panel work. Rust damage to the guards was extensive. To keep the original guards, new end to end centre sections were welded in, and the job is undetectable.  Apart from a few other mechanical jobs, the rest of the restoration was undertaken by myself including paintwork, most of the nickel plating and making of various missing parts. 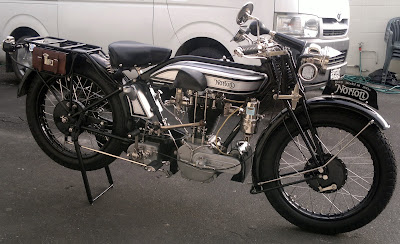 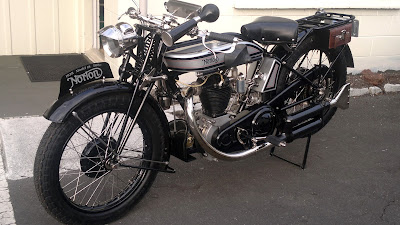 Ken: "Tozer Kemsley and Milbourn Ltd  (TMK) are not the NZ and Australian Norton agents of the 1920's. This has often been assumed because they are listed as the recipient of Norton's from the factory in the records. They are in fact the Forwarding Agents, and for a fee owned the bikes after they left the factory and before they were cleared from the docks on arrival. They paid the factory and the agent paid TKM on arrival. The company survived into the 1960's in Australia and later in the UK.

The NZ agents for Norton from the early 1930's were W. Whites Ltd in the North Island and Velvin and Henderson Ltd in the South Island. This continued until the 1960's.

Rod Coleman confirmed this arrangement and questioned why a company as wealthy as W White Ltd, also main agent for Velocette, Triumph and Ariel didn't use their own money. Surprisingly Norton let Rod Coleman and his father Percy Coleman buy direct from the factory, even though Rod was an AJS works rider. Most of the NZ new Manxes were supplied through the Main Agents but all Rod's new Manxes were invoiced direct.
Newer Post Older Post Home